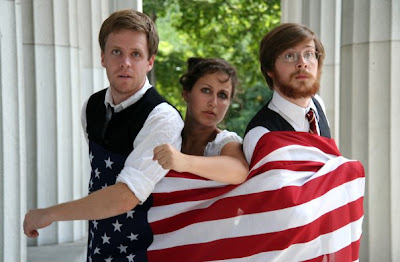 Katey Rich ’06 sends in this heads up for those of yous stationed for the summer in the New York area:

Students past and present, is making its New York theater debut this weekend. Their new play, “Daguerreotype,” was written by Stephen Aubrey ’06 and is directed by Jess Chayes ’07. Edward Bauer ’08, Hayley Stokar ’06, and Zach LeClair ’10 star.

“Daguerreotype” tells the story of Mathew Brady, a photographer from the Civil War era who became famous for his portraits of the great men of his time (Abraham Lincoln, George Custer, Ulysses S. Grant and many others) as well as the most graphic battleground images the country had ever seen. In “Daguerreotype,” Mathew is at the twilight of his life, and he must choose between the life he has built and the legacy he wants to leave behind. Haunted by the ghosts of the past and the spirit of his dying, catatonic wife Juliette, Mathew must revisit his past and consider his future, as a forgotten legend from another era.

“Daguerreotype” is only one part of the Story Project’s American Summer Theater Experience– a festival with TASTE! There will also be readings of new plays– including those by Anna Moench ’06, David Haan ’06, and Chris Kaminstein ’05— and performances by Wesleyan’s own sketch comedy group Lunchbox. It’s all happening at the Abingdon Theater in Manhattan, at 312 West 36th street.

The festival starts Thursday, August 2 and runs through Saturday, August 11 (with no shows on Monday the 6th).

You can buy tickets for Daguerreotype here.

There will be scores of Wesleyan students at all the shows, not to mention general New York theatergoers, who are always worth knowing. Come support some of your fellow students and alums (a full list of company members can be found here) and see historical, documentary theater that we absolutely promise is not boring or stuffy.

2 thoughts on “The Daguerreotype Starring Half of Wesleyan…”