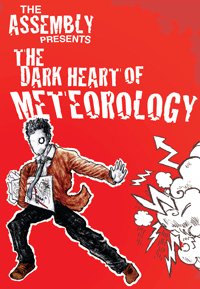 Nick Benacerraf ’08 writes to tell us about a cool collective of multi-disciplinary Wes grads who formed a company called the Assembly while still in school. They will be having 4 weeks of performances in NYC, so if you’re out there check it out:

THE DARK HEART OF METEOROLOGY

Amid concerns about global warming and an uncertain future, The Assembly unleashes its failed weatherman on the people of New York with a simple message: The weather is going to kill us. All of us.

The Dark Heart of Meteorology is a series of barely-multimedia presentations–part lecture/slideshow, part happening–by lonely traveling weatherman Franklin Elijah White. The last in a long line of meteorologists, Franklin is traveling across the country on an increasingly quixotic journey. Aided by only his slide projector and assorted meteorological equipment, his mission is to warn his audiences about the revelations contained in “The Dark Heart of Meteorology,” his late father’s manuscript.

The Dark Heart of Meteorology combines live performance, video, and the lost art of the slideshow to investigate the tensions between chaos and control and the intersection of the personal and meteorological.

THE ASSEMBLY is an award-winning Brooklyn-based ensemble of multi-disciplinary artists, formed by four Wesleyan grads. We seek to unite our varied interests in service of creating wide-reaching, unabashedly theatrical and rigorously researched ensemble performances that address the complexities of our ever-changing world. We embrace collaboration as the core of the creative process, developing all the elements of text, action and design side-by-side within the rehearsal environment

9 thoughts on “The Dark Heart of Meteorology in NY”