Tony award-winning Broadway musical with a movie adaptation in the works, check. Grammy award win, check. Co-founding a improvisational hip-hop comedy group that does really fun and dynamic shows, including one on our own campus last year, check. Sharing screentime on a popular medical drama with no less than HUGH LAURIE, check. Gig at The White House, check.

Ah, Lin-Manuel Miranda ’02. I love so much about the things that you choose to be (do?). And now, fresh from the Twitterverse, confirmation that he will soon guest star on one of everyone’s my current fa vourite television shows, Modern Family.

Read on for ~PHOTOGRAPHIC PROOF~

Actress Sofia Vergara, who plays the inimitable Gloria Pritchett on the show, poses with Lin-Manuel on set: 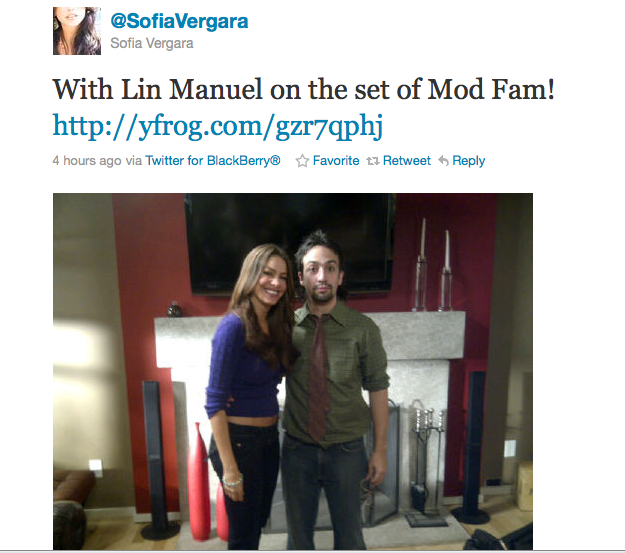 But it’s not like we’d expect much less, no?

No news yet on when this episode will air, but Season 2 just ended with this Wednesday’s episode, and the show’s been picked up for a third season, so it’s something to look forward to over the hiatus, perhaps. :D

3 thoughts on “Lin-Manuel Miranda to appear on Modern Family”