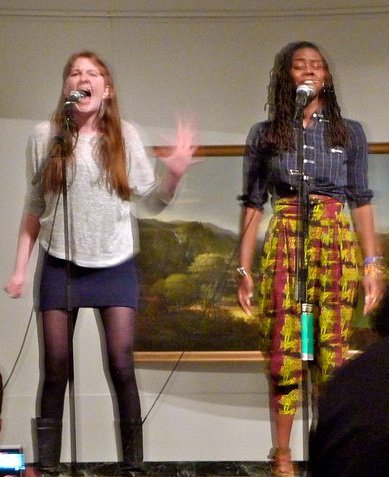 Spending a week in Michigan surrounded only by poets and poetry may have been the furthest from reality I have been in a while. But at the same time, I experienced more emotions in a short period of time than I ever thought possible. One poem would punch you in the face, the next would gently hold your hand, then you would be hiding under your chair in fear, and finally, you were crying from hearing a line that let you feel something you never knew you could. I have never felt more strongly that a poem can change your life.

Between April 6th and April 9th, weSLAM competed against 36 other teams in the College Unions Poetry Slams Invitational, the national spoken word competition at the University of Michigan in Ann Arbor. weSLAM advanced to the semi-finals and snagged both the Spirit Award and the award for Best Persona Poem, ultimately becoming the 7th-highest-ranked poetry team in the land of the free and the brave. But this is not what’s important here.

We went to CUPSI with three goals: to have more fun than anyone, win the Spirit Award, and advance far enough that we would have the opportunity to perform the poems that were most important to us as individuals.  The fact that we won the Spirit Award reflects on more than just how the team carried itself.  That enthusiasm and energy is a product of the incredible slam community that has developed at Wes this year, so everyone who has been a part of weSLAM this year is responsible for that award.

This kind of statement is indicative of the general sentiment at Wesleyan surrounding the poetry scene.  This is a communal art, which is to be shared, enjoyed, and appreciated.  Moreover, weSLAM’s success is due not just to the team’s efforts, but to every Wes student who supports and/or participates in this artistic medium.

This was definitely the pinnacle of my slam experience thus far. I refer to CUPSI as “Slamland.” I haven’t seen such a large, fun group of reassuring people since my Louder Than A Bomb days back in high school. My most treasured experience was sharing a week with bunches of fun, positive people.  That Emily’s and my group piece got such good reception was also a great honor, as the story was really relevant to my family history.  I wrote it for my 3rd great grandmother.  I always like to reiterate that for me the point is not the points; the point is the poetry. And what beautiful poetry we shared at CUPSI.

It means something to pass a piece of you to your team and the community of poets surrounding you, and trust them not to drop it.

I think CUPSI was an incredible experience for all of us.  We were all able to take our work to new heights through the intensive amount of prep and practicing we put ourselves through, and it was also a huge help that that Alvin Lau, one of the most successful spoken word poets in the world, decided to help us out with performance critiques and strategy.  He pushed us really hard at times, but always for the right reasons, and I think he pushed some of us to the next level in terms of our performance ability.  We also got to hang out with the poets from other schools who we have become close with and are starting to really think of as our artistic family.  Getting to spend time with them and hear their new work was really a privilege, and of course they introduced us to some incredibly talented new friends who have become really important to us as well.

Listening to the 37 teams in attendance was encouraging and inspiring. I also have never been prouder of my own team. We all worked really hard, and performed our poems better than we ever have (with much help from our wonderful and talented coaches: Morgan Hill ’14 and Alvin Lau). Getting to semi-finals as a first-year team was a huge accomplishment. Winning “Best Persona Poem” with Randyl meant a lot to us; performing Eyes was one of the most emotionally challenging things both of us had ever done. But more than anything, we were so excited to win the Spirit Award. That was the most important thing: to bring the weSLAM spirit to Michigan.
How much has happened to weSLAM in its first year of existence is incredible. What it took to get to nationals was challenging at times, but the poets and the poems made it all worth it. I don’t take the word “family” lightly, but that is what we are. And this is only the beginning.

Click here for the official rankings; just know they’re not as important as what has been written above.
We are highly impressed by weSLAM’s success, but their humility is what is truly earth-shattering.  Thank you, guys.
To end, a quote from Josh Smith ’11: “weSLAM, baby…this is only the beginning.”
And this is the end.  Of the article.
The weSLAM team is: