If you’re one of the many people who’s asked someone in the last week what Occupy Wall Street is all about, or someone in the last 12 hours what the tents on Foss are all about, and not received a satisfactory answer, hopefully this post will help. Below is a piece put together by Daniel Plafker and Coady Johnson, both ’15, that sums up both the motives behind the movement and Wesleyan’s involvement in a few paragraphs. Click through the jump for more words from them, myself, and a call to come to the info sessions at the Foss Hill tents, today and tomorrow at 5 PM: 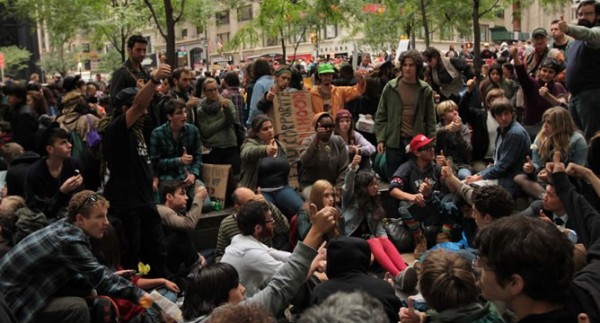 Our own Tahrir Square moment is  happening right now in the newly renamed “Liberty Plaza” in the  Financial district in NYC.

Wesleyan Students: This is a call to action!
This past weekend, a group of more than twenty Wesleyan students heeded the call and descended on Wall Street to join more than two thousand protesters in an effort to occupy New York’s financial district. Our goal was to send a message to the world that the people would no longer tolerate a system in which the interests of corporate profits outweigh the needs and well-being of the masses.

What we helped to build when we arrived was an amazing and beautiful community, built on the long-term occupation of Lower Manhattan’s Zuccotti Park (now renamed Liberty Plaza), modelled after the revolutionary occupations of Tahrir Square in Cairo and Puerta del Sol in Madrid earlier this year.

The community that has emerged is one of overwhelming love, respect and mutual cooperation, guided by a consensus-based decision making process and direct democratic assemblies through which we formulate demands and solutions. Good vibes abound, with drum circles and yoga sessions mingling with passionate marches and intense debate. Catch a glimpse of the magical atmosphere that is Liberty Plaza here  (be sure to check out WesCelebs @ 2:39):

The Wesleyan contingent met with students from other colleges and high schools, both in the city and in the region, to create a network to help keep the occupation alive through sending more individuals to help hold the square and by providing much needed material support like food, bedding, and vital media supplies.

This electrifying movement is a true opportunity for us as students to affect revolutionary social change in our lifetimes. However, facing serious police repression and harassment, the movement risks coming to an early end unless the numbers in the square can be maintained.

To find out how you can join this exciting action, we implore you to come to our info sessions at Foss Hill on Wed. and Thurs. at 5 PM. The students who took part in the action plan to return again this weekend, in even bigger numbers.  Even if you cannot make it to NY this weekend, please come anyway to find out other ways that you can help.

Join us and make this change a reality!

While (to the best of my knowledge) coverage of the protests on mainstream print and television media has been cursory at best, the internet has produced fairly extensive coverage both professional and informal. A lot of coverage from the established press has been through newsblogs like the New York Times’ City Room and The Guardian’s Comment is free, but the International Business Times has also been keeping tabs, along with Democracy Now! and Al Jazeera.

Perhaps you’re interested in exactly what “police repression and harassment” has been going on in response to the protests. While (in terms of arrests, at least) the police presence was generally not invasive over the weekend, since the work week started, numerous arrests have been made in a pattern that aligns with typical law enforcement tactics for demoralizing and discouraging protesters, sometimes violently.

Whether or not you’re interested in going to New York this weekend, this is a cause with a solid ideological and informational base that could use all kinds of support. Direct action in Manhattan’s Liberty Square would likely be appreciated most, but you can also donate to the media outreach and food teams, participate in solidarity actions on campus (LIVE IN OUR TENT CITY! WE HAVE LOTS OF FUN!), or if you doubt the rationale behind the protest, do some research yourself and see if you come to the same conclusions some of us have. Let me emphasize that behind this movement is a fair range of socioeconomic and political diversity – students, professors, investment bankers (!), career activists, veterans, Socialists (ooh, a naughty word!) and beyond are all among the demonstrators in the financial district. When we say “We are the 99%”, we mean it. Again, if you’re curious, feel free to use Wesleying’s coverage, the media, and your peers at the Foss Hill 24/7 Tent Party (w00t)  as resources. Peace, y’all.