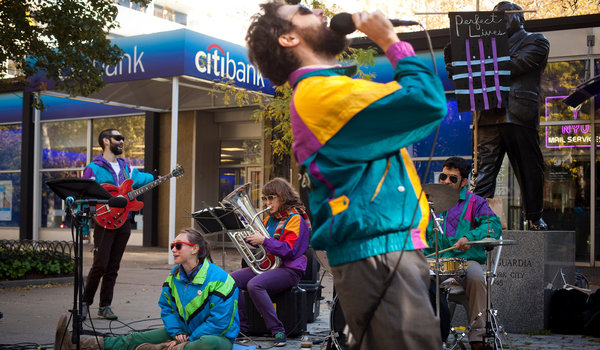 Former WESU personalities Aliza Simons ’09 and Dave Ruder ’05 write in from beyond the void (there’s life out there, it seems, if you look hard enough) about a pretty cool project they’re involved with this week. The two are members of composer-performer collective Varispeed which, just last week, performed a newly arranged rendition of composer Robert Ashley’s 1983 television opera Perfect Lives. (Ashley’s name should be familiar to students of Intro to Experimental Music: the acclaimed composer was a member, along with Alvin Lucier and others, of the Sonic Arts Union collective, and his pieces have been prominently featured in Lucier’s syllabus.)

“Dave and I were both members of WESU Middletown 88.1, too, where we both found a lot of inspiration,” Simons writes. The project was featured this week in a NYT article examining new interpretations of Ashley’s work. (Not that the 81-year-old isn’t still active in the scene.)  For an excerpt:

So the Varispeed production, presented as part of the Performa 11 festival, was less an act of rescuing a work from oblivion than one of repurposing its materials to unleash latent potential, while remaining faithful to its textural integrity and structural rigor. The seven segments of “Perfect Lives” — which together obliquely and poetically describe a conceptual Corn Belt bank heist, its participants and its witnesses — take place at two-hour intervals during a single day.

Accordingly, Varispeed presented “Perfect Lives” in real time, organizing its episodes chronologically and assigning them to different arrangers. A steadily swelling audience attended the ensemble’s trek, which began at 11 a.m. in Washington Square Park with Gelsey Bell’s modest village-band interpretation of “The Park.”

My favorite part of this performance (which I’ve sadly only managed to read about), though, is “The Supermarket,” when “the troupe paced through the aisles at Essex Street Market, delighting some shoppers and perplexing others, as Paul Pinto’s rapid-fire declamation emanated from the public-address system.” (There’s an image of perplexed shoppers looking on, and it’s really quite grand.)

Varispeed is also involved in a performance of Robert Ashley’s “That Morning Thing” at the Kitchen this week. (Or was it today?) (Which kitchen?) (What?)