Wes counts Daniel “Lemony Snicket” Handler ’92 and the late Robert Ludlum ’51 among its alumni who have left their mark on the writing world, but somehow Blake Nelson ’84 seems to have slipped a little under the radar so far — at least here on Wesleying. 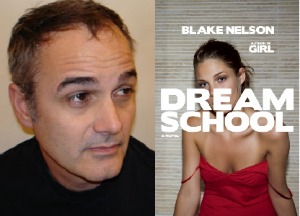 Nelson’s new young adult novel Dream School, released last month, is a follow-up to his first novel, Girl, which gained something of a cult following from the moment it was serialized in the classic early ’90s girl-power magazine Sassy.

Dream School sees Girl’s protagonist Andrea Marr leave behind her grungy lifestyle in the Pacific Northwest to attend an elite liberal arts college on the East Coast. It’s not surprising, then, that Nelson has been asked in recent interviews whether parts of his latest novel are based on his own college experiences.

Click through for Nelson on Wes and lots of loving linkage (no awful alliteration though, promise):

Christina: How much of “Dream School” is based on your own college years?

Blake: A lot. Especially the beginning, that first year or two of college, that’s pretty much my experience exactly. I was pretty out of my element at a fancy college like Wesleyan (Wellington, in the book). But probably most people feel that way.

I especially enjoyed writing about those first months when every little detail matters. When you’re noticing what kind of watches people have and how they organize their dorm room. And people are reading The Economist and you’re thinking, “Oh my god, I don’t know anything about the world.” Also the loneliness of it, and that sense that “your life is starting.” You are truly on your own. It’s a real test. It’s a real “rite of passage” moment, especially if you didn’t already go to boarding school or Exeter or whatever. (Interview with xoJane)