Yesterday, at 1:20, concerned students met to plan an action to communicate the importance of need-blind admissions to the Board of Trustees, who were on campus this weekend for an official retreat. At 6:30, the meeting was reprised, with an extra dose of urgency: “Nobody has this covered; it’s not being taken care of by someone else. It’s just us, your classmates and neighbors, and as many of you can make it.” At noon today, students gathered outside of Usdan, wearing red and finishing up a banner while some brandished cameras. By 12:30, they were in a trustees’ meeting—telling them directly that students want to be included in the conversation.

The video at the top of this post includes much of the climax of the action; after the majority of students ended up going to the Daniel Family Commons, some unfurled the aforementioned banner—reading “BRING US INTO THE CONVERSATION”—outside the meeting room, while others attempted to enter. Public Safety guarded the main entrance while students sat in the open doorway, but a small group bypassed and made it inside the meeting, where they spoke to concerns about need-blind admissions and decision-making transparency.

Watch the video yourself to form your own take on the Board members’ responses to the latest installment in, as one trustee put it, Wesleyan students’ “long and storied” history of entering closed-door meetings. Because legendary camera operator Ben Doernbeard ’13 was… held up at the door, the first couple minutes of conversation with the trustees are hard to catch, but a good portion of it is audible—turn up the volume, just to be sure.

Check out photos of the action (courtesy of our very own wieb$) on Facebook, or click past the jump to see them here, along with a couple extra shots of the banner by Zach.

This post is mainly the video and photographic record of events with a quick summary tacked on, but if you have your own contribution—whether you were present or not—feel free to sound off in the comments or bring them up at tomorrow’s need-blind forum with President Roth. We’ve really gone and done it now, haven’t we? 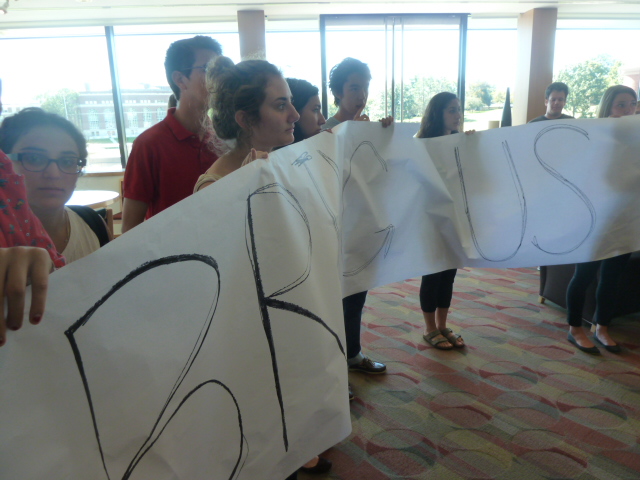 16 thoughts on ““Bring Us Into the Conversation”: Students Occupy Board of Trustees Meeting”