Postscript: Thank you for coming to Wesleying’s first ever forum! The turnout was so big it spilled into the hallway. Click past the jump for photo and liveblog coverage, and stay tuned for full video footage. 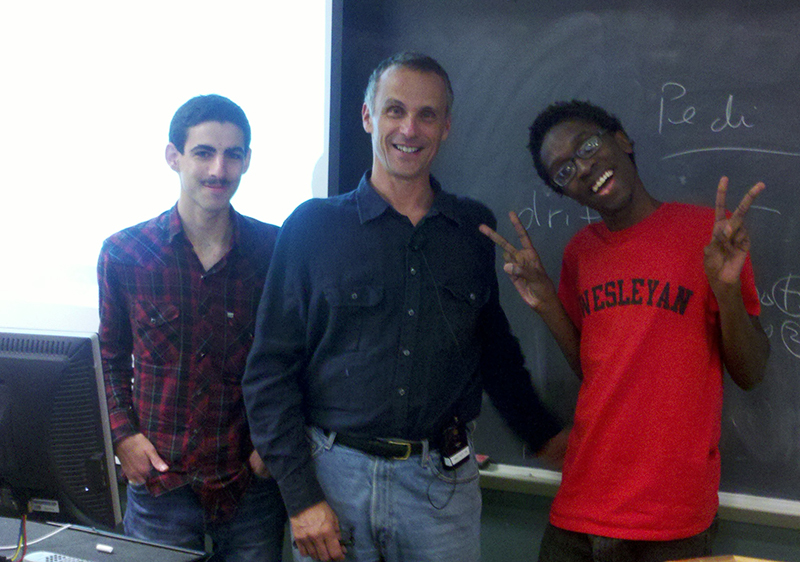 This will be live-streamed and live-blogged. WATCH THE LIVE STREAM HERE. Live blog updates after the jump.

If you have last minute questions for President Roth, e-mail staff[at]wesleying[dot]org.
[nggallery id=185]

Here are the questions Wesleying received this week and asked President Roth during the forum:

‘It is extremely disappointing that I had to find out that this was happening from a third party. Other than a quick line in an email send 3/1/2012 about Wesleyan’s Reaccreditation Self-Study, there was no hint that this was happening until last month, at which point, presumably this was already a done deal. Where was the communication on this vitally important matter when there was still a chance to do something about it? Where were the calls to fundraise letting people know that if $X weren’t raised then need-blind admissions might have to be sacrificed? We are constantly hit with artificial cries for urgency that we have to give by end of this challenge or during GOLD giving month, but here, where there was real urgency, with real consequences if we didn’t act, we instead got silence.’

Why has there not been a serious, highly publicized capital campaign, targeting alumni, parents, and other members of the Wesleyan community, with the explicit goal of producing enough revenue so that administrators no longer see this move as necessary?

Livestream is now off-air, and I think we’re about to log off too. Thanks for reading errbuddy.

Roth thanks everybody for coming and recommends the we continue this conversation; people start file out. Sudden chaos.

Anwar has double-stuffed oreos for the crowd.

Roth: this is an ongoing process. We should continue this conversation. Rothdog out.

Roth: Of course. Show up every year and tell us what the impact of this is. We have a commitment to diversity and we want to see that in the statistics, not in the rhetoric. What we’ve done in the last 20 years is not working…it’s not giving us the diversity that we want.

Maintaining diverse demographics is “key” to this whole issue. “We will publish the [demographics] numbers every year.”

“We have a commitment to diversity and we want to see that.”

“The vigilance of the students will be key,” says Roth.

There is a fundraising plan, but we can’t project when the fundraising will be sufficient for Wes to be need-blind.

If this is only a temporary measure, why is there no explicit timeline for the need blind campaign? Roth: Because we don’t know how much need there will be. All we can tell for now is how much revenue we bring in, and how much we need, etc. so that more students have access to Wesleyan.

People have really come up with some creative ways to poke their heads in the room.

In other words, why is there no current timeline?

“I don’t know what the need will be, that’s what need-blind means.”

Last question of the night: “if this is the least bad option, can the administration announce a finite plan by which need-blind can return?”

“I don’t think we recruit people who we’re going to reject.”

We have more Prep-for-Prep students here than practically any school other than Harvard, which is considerably larger.

“This is, I think, the first endowment campaign that Wesleyan has done, and it’s to put more money into a scholarship program.”

“We don’t recruit people that we’re going to reject.”

Bouncing off pyrotechnics, I can see at least eight people standing in the hallway to my left.

An audience member asks if Red & Black callers are mentioning this issue to alumni when asking to donate.  Roth says that this is the first campaign Wesleyan has done with financial aid as its focus.  Previously, it’s been out new buildings and the like.  Financial aid has never been so important.

My estimated head-count is well-over 100 attendees, and I can’t see everyone in the hallways outside who can’t get a place to sit.

“We need more scholarships, but I don’t know if we need ‘need-blind.’”

“We raised more money last year through gifts and alumni donations than in any other year of the university’s history.”

If we raise more than 150 million dollars, we’d have the same amount of students on financial aid that we used to have.

FYI: the campaign itself (and its exact nature) is “to be announced.”

“More than half our students pay the full tuition…We need more scholarships to have students from underrepresented groups.”

“If we raise the money, we will have more scholarships.  This isn’t like losing your innocence.” Haha.

“We do ask for money, as you’ll find out as soon as you graduate.”

As part of the ongoing campaign discussed earlier, Wes is trying to raise 0 million for the endowment specifically earmarked for financial aid.

“I know you’ve looked around and wondered how that person got in.  I know I have!”

Ben Doernbeard ’13 just arrived and cant get in. *laughs*

Question: why not raise the debt ceiling and let people come here? Roth: we don’t want to regress to our previous load levels and change campus culture and post-graduation options in that way. (Doesn’t consider this a particularly “knock-out answer.”)

Admissions is still grappling with the question of Early Decision, “we don’t want to drive people to ED improperly.”

“We don’t want people to apply early decision if they really don’t want to.”

How much is tuition projected to rise with the new policy?

It currently goes up 5% a year with our current policy (which has been around the average for the past decade). But with the new policy, the tuition would increase less from year to year.

Tuition will be “probably around 3%” for next year, based on higher education inflation.

Roth points out that John Gudvangen from the Financial Aid department is here.

Roth suggests sending suggestions to Zach Malter ’13 from the WSA or to email Roth himself.  Roth will forward suggestions to John Meerts, VP of Finance and Administration.

Roth pulls out some French that I did not comprehend.

In 2008, it was suggested that Wes get rid of need-blind, and Roth said, “I’m not going to be the president who does that.” hah…

Other options that were considered to fix the financial situation:  we could increase each class year by 100 students or get rid of wood frame houses and put everyone in triples.

“It seems that middle class is becoming an underrepresented group,” posits an audience member.  Roth hopes two things will help with that:

Roth did not want to be the president who got rid of need-blind admissions when he first got here.

“If we’d had 30 extra students, we would have been popping, uhhh… Miller Lite or something…” – Roth, referring to his time at a California art school.

Watching pyrotechnics watch the livestream from here, too. 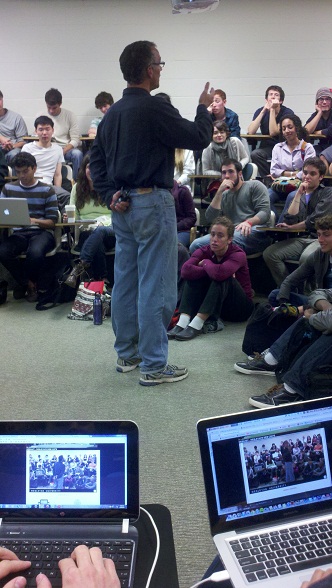 Watching the livestream live while liveblogging; Syed liveblogs opposite, dressed remarkably like Waldo.

Roth has done research on the meaningfulness of the word “need blind” among applicant pool. Many of the schools that are need-blind are much less diverse than Wesleyan. When asked for more concrete examples of this, he responds that many of our peer schools are actually not need-blind with regard to wait lists.

Roth talks about how much more selective Wesleyan is today.  ”When I was a student, gosh, you could just walk in!”

“We’ve done some research, and many of the schools that talk about need-blind have much less diversity than Wesleyan does.”

If anyone knows of anyone who would be willing to donate a hundred million dollars, let President Roth know!

In case you missed it, Samira and pyrotechnics have now been reinforced by Syed and artemiswins. Yay liveblogging!

Audience Question: “When you say this new program will factor financial means, what does that mean?”

Roth talking about an ongoing campaign to raise money for the endowment (among other things); hopefully over 0 million will be raised, bringing closer to our wealthier peer schools.

Our endowment was not too different from Amherst’s in 1997. We spent too much and didn’t save enough. Amherst also has fewer students. Wes also started saving money later than our peer institutions. Roth says we’d raise over 400 million dollars with this need-blind campaign, which would go to endowment for financial aid, scholarships, core academic endowment, etc.

“It’s pretty simple.  We spent too much and didn’t save enough.”

Question: With regards to the 2012 Operating Expenses chart, what goes into “auxiliaries?” Roth: Bon Appetit…things that come in and out of the budget.
Q: How about “other?” Roth: Summer camps at Wes…etc.?

Adam Brudnick ’13 asking about endowment draw and endowment returns. Roth mentions the appointment of Ann Martin as the Chief Investment Officer; the endowment is doing better now than in the last few years.

Some of the audience: 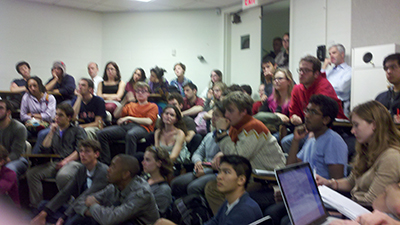 “I don’t know if you believe me, but we have tried over the past three years…to get rid of the inefficiencies”

Roth asks, “How generous can we afford to be?”

Looking around the room (PAC 002), it’s difficult to tell what’s an actual seat and what’s a stairway.

The room is literally above capacity, with people entering through all three doorways.  Roth is speaking with the link http://2020.blogs.wesleyan.edu/2012/06/22/sustainable-affordability/ open.

You can read about it here.

The room is literally stuffed with students, plus a fair collection of administrators: President Michael Roth ’78 is joined by Andy Tanaka ’00 of the President’s Office, Dean Mike Whaley, Dean Rick Culliton, Director of Public Safety Dave Meyer, and Director of Strategic Initiatives Charles Salas. Also, others I probably missed. Students still pouring in.

I am currently watching the livestream on my laptop while sitting right beneath the camera. Whoa.