Our liveblog coverage of the event appears here. Scroll on for detailed notes and time stamps.

On Monday night, Wesleying hosted its first ever live forum: a Q&A session with President Roth regarding the University’s controversial decision to scale back need-blind. Impressively, over a hundred students showed up. Only a day after student protesters occupied a closed Board of Trustees meeting, this forum turned out to be more timely than any of us anticipated.

We now have video footage of the entire forum, courtesy of Sam Barth ’13, Lucas San-Juan ’13, and Wesleyan’s ITS staff. It’s long (a little over an hour), but if you missed the forum and are nonetheless interested, it’s well worth the viewing. If you’ve only got 15 or 20 minutes to spare, definitely consider jumping towards the end of the conversation—it gets a bit heated, and some of the most noteworthy exchanges take place past the 40-minute mark.

There is also Wesleying photo and liveblog coverage of the event here, plus a fairly extensive Argus overview of the week’s events here. Additionally, I’ve taken the time to notate much of the video, including time stamps for significant questions and memorable exchanges (excluding Roth’s 15-minute introduction). Those notes appear after the jump.  (I apologize for my unseemly mustache in the video.) 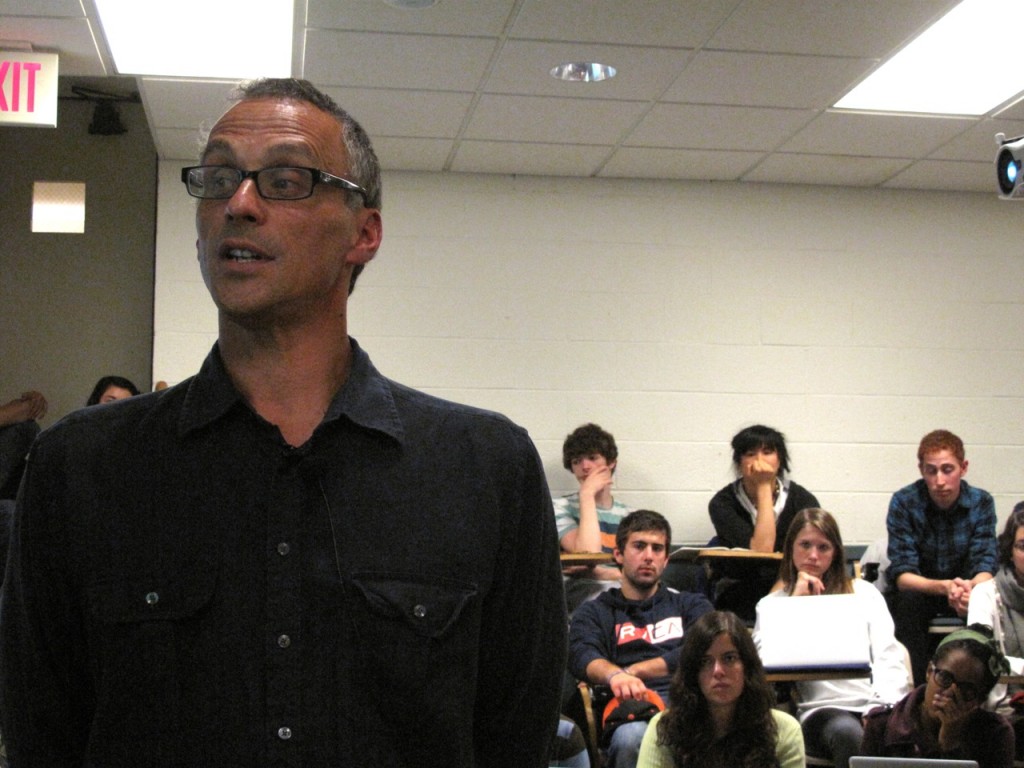 18:33: Student asks: “Instead of [cutting need-blind], why not hire a consulting group to look at improving alumni relations?” Roth says a campaign is getting underway that will raise over 150 million dollars for scholarship endowment. “But you’re absolutely right that some of our peer institutions… We try to understand, What did they do in the past that we didn’t do?”

20:36: Roth says: “It’d be more fun to spend [the money in the annual fund] now.” But “we’re gonna raise I hope more than $400 million in this campaign.” The money will go to the endowment and financial aid—“not for new fancy buildings.”

21:04: Question from a student: “Is this gonna be like a forever policy at the University?” Roth responds that need-blind is just a label that “can hide a lot of hypocrisy” and says, “My goal is to increase scholarships!”

23:11: Question: “What exactly does that  mean? How does [financial need] factor into admissions?” Roth says he thinks it will affect the last ten percent of the class.

25:48: Question about how it will affect the wait list. Around 26:00, Roth asks if anyone knows of a wealthy alumnus who give the university millions of dollars. Then Roth says: “We’re not need-blind! We actually look for students with need.”

27:00: A question from the internet: “In an environment where the institutions with which we try to compete are either continuing a tradition of need-blind or  extending their policies to international students, how do you and the Board of Trustees expect to compete for applications from middle-class and low-income families when as Professor Potter stated they ‘believe they will not be discriminated against under a need-blind system’?” Roth says: “We have done some research on the meaningfulness of the words ‘need-blind’ to the applicants in our pool and we found great confusion about it.” Then he says that other schools that claim to be need-blind aren’t as diverse as Wesleyan.

28:48: A different student asks Roth to clarify the research that they conducted on who will apply to Wes. “Can you give more concrete examples?” Roth admits: “I do think people who think they will be discriminated against in advance will be less likely to apply.” But, on the other hand, “applications continue to grow at schools that accept fewer and fewer of those students.”

32:17: Another question from the internet: “You have repeatedly said that this was the best option, that everything else that could be cut would damage the Wesleyan experience. What (specifically) were the other options that were proposed as alternatives to eliminating need-blind admissions? Which things would have been cut? Which policies would have been changed?” Roth uses library books and a salary freeze as examples, and says they are less desirable solutions.

33:35: Roth says if they had 30 extra students at his previous job in California, “We would have been popping Miller Lite or something.” Laughter ensues. “Or soda pop!”

34:52: Roth: “We could double the class size. Don’t hire faculty.” But “we’d be protecting access to something that we’ve degraded.”

35:08: Roth: “I don’t want to degrade the thing people want access to! Because I promised I wouldn’t do that.”

36:30: Roth talks about the three-year option and says it’s the only option that doesn’t change the campus experience.

37:15: A question from a student about whether or not the administration would encourage opinions from students about what could be cut and what’s inefficient. Roth shouts-out the student budget sustainability task force and also says something in French.

37:40: Roth jokes about people suggesting he shouldn’t be paid: “Right now that goes directly to the bottom of the box.” Laughter ensues.

38:45: Roth: “A lot of us feel very ambivalent about suggesting we fire somebody to save money.”

42:58: A student asks if Early Decision applicants will have an advantage since their applications will be considered need-blind. Roth says, “We don’t want to drive people to Early Decision inappropriately.” So “we’re not going to declare Early Decision off-limits.”

44:00: A current senior says he would have felt comfortable taking on a lot more debt than he is now if it meant being admitted vs. not being admitted. Roth: “I don’t think I have a knockout argument,” but “we think it would really change the way people studied on campus … if debt levels increased significantly.” Explains justification for not increasing debt.

46:56: Question from Benny Docter ’14: “I want you to clarify more what you think the relationship between actively discriminating against poor people in the admissions process versus, say, cutting the grass and how those two decisions degrade or do not degrade the Wesleyan experience.” Roth

47:36: Roth responds sarcastically: “Well, gee, I didn’t think I said we were going to be actively discriminating against poor people, but that’s a lovely way of putting it.” Also: “Congratulations.”

48:09: Roth: “I’m sure you’ve looked around sometimes and said, ‘I wonder how that person got in!’ I know I have!” Loud, uncomfortable laughter. Then Roth says some people get rejected from Wesleyan and get into Brown—“but that’s not that hard to understand.”

49:02: An internet question: “Why has there not been a serious, highly publicized capital campaign, targeting alumni, parents, and other members of the Wesleyan community, with the explicit goal of producing enough revenue so that administrators no longer see this move as necessary?” Students respond by snapping enthusiastically.

50:12: Roth: “This is exactly what we’re doing.” Roth tries to list examples of what he believes to be transparency, and says, “We do ask for money when you graduate, if you haven’t heard already!” Then: “It is true that not everybody heard about it… but I think there was an article in the Argus in April!” Roth seems a bit tongue-tied answering this question.

52:08: I push back on the question: “So why was there not a more explicit and forward [capital] campaign acknowledging that need-blind was in jeopardy [before the policy was voted on]?

52:52: Laignee Barron ’13 calls out Roth for not answering the question and suggests that a lot of alumni are now less likely to donate now that need-blind has been cut. “Why isn’t there aim right now to contact people?” Roth says: “I do think we have been pretty vocal and even aggressive in trying to raise money for this.” Roth acknowledges that some alumni will not want to donate when the institution isn’t need-blind.

56:25: Peter Myers ‘13 asks if there will be an affirmative action policy based on socioeconomic status. Roth replies, “We certainly have such a policy now.” Peter responds that it’s more of a recruitment process than a selection process, and Roth retorts: “They’re inseparable. We don’t recruit students that we’re going to reject.”

59:00: Question from the internet “If this is the ‘least bad’ option, why has the administration refused to provide an explicit plan or time-line to set Wesleyan on a path to return to need-blind?” Roth: “We have a commitment to increase the percentage of the budget that goes to financial aid over time.” Will this be a temporary measure or not? Roth replies: “I don’t know what the need will be.”