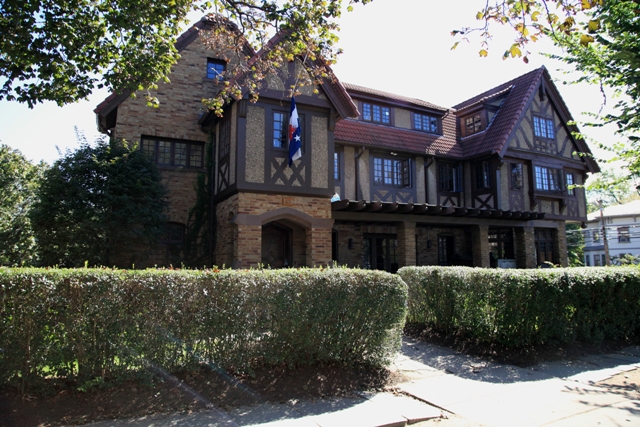 I’ve been trying to figure out how to start off this post and I’m not sure I’ll do better than the Hartford Courant: “A former Wesleyan University student who was assaulted two years ago during a Halloween fraternity party filed a federal lawsuit Friday accusing the school of failing to protect her from dangers at [Beta Theta Pi] fraternity, which she claims was known on campus as the ‘Rape Factory.’ ” In an extremely brief article, the Courant notes that one ‘Jane Doe’ of Maryland has filed a 27-page lawsuit in the US District Court of Connecticut, alleging that the University violated Title IX by failing to “warn or otherwise take corrective action” against the fraternity that could have prevented the assault.

As many of you may know, Beta was the primary subject of some controversy very recently, as the University, in the midst of a smoldering disagreement with Beta, changed its housing policy to specifically declare that “Wesleyan students will be prohibited from residing in—or using for social activities—houses or property owned, leased or operated by private societies that are not recognized by the University,” which essentially meant that the University could punish you for eating dinner at a ‘unrecognized’ church, or secret society, or a cupcake shop, or a strip club, or pretty much anything else. Needless to say, some people were pretty confused and pretty pissed.

This policy was put in place in response to at least two documented cases of sexual assault that occurred at Beta around this time (that I know of, anyway). The University issued several warnings to students about alleged sexual assaults. Here is the main body of an email I dug up from my inbox, dated November 9th, 2010:

Over the past week we have received reports of sexual assaults that have allegedly occurred during recent parties at Beta Theta Pi, 184 High Street.  The Middletown Police Department has been made aware of these allegations.  We are not able to share further details about the reported incidents at this time.

These recent reports have renewed our concern about illegal and unsafe behavior on Beta’s premises, as well as our concern for the safety and well-being of Wesleyan students living at the residence or visiting the house.  We remind all members of the community that this privately-owned house does not have any formal relationship with the University.  Further, we advise all Wesleyan students that they should avoid the residence because we cannot establish the safety of the premises.

We are hopeful that those responsible for any crimes related to these allegations will be identified and prosecuted to the fullest extent of the law.  The University will also pursue campus judicial charges against any students who may have been involved.  Meanwhile, we will continue to do all we can to support those who brought these reports to our attention.

During this period, Beta was considered off-campus housing and had not been a part of Program Housing for several years. The brothers living in the House also had rooms in regular campus housing. As private property, P-Safe was not permitted to patrol or even enter the premises, and Beta occasionally called the Middletown Police to evict P-Safe officers from the house (according to a now-graduated Beta member; I was not present for any of these occasions). However, Beta regularly had an MPD officer posted outside the house when they hosted events, and did take some measures to prevent sexual assaults within the house. Beta’s brothers have been mis-characterized in the past as friends of sexual assault; at least one of the documented cases (again, that I know of) during this time was against a non-Wesleyan student.

Clearly, these measures were insufficient, though this certainly did not require the overly broad, extremely restrictive policy response taken by the University. But that part is all bygone.  This new lawsuit brings the issue of sexual assault back to the fore.  Wesleyan has arduously engaged in efforts both to track and eliminate incidents of sexual assault on campus, creating the Sexual Violence Task Force and Sexual Assault Response Team a few years ago. These groups regularly report their activities and findings to the campus community (search your inbox). This new lawsuit highlights the urgency and necessity of their work.

Wesleying will provide updates when possible. Comment in the comments with comments if you have comments.

[Edit 7 Oct 12:38PM pyrotechnics: A staff tipster just sent me a link to this tumblr page, which was apparently put together by an alum just yesterday. The alum claims that Wesleyan as a whole is a rape factory and that the University institutionally and intentionally attempts to silence sexual assault survivors in order to limit bad publicity. The page also seems to suggest that people should use physical violence to take revenge against Beta and other sectors of Wesleyan that “defend” rape culture. I’m curious as to when this alum graduated, because many of the claims made about University policy are no longer true. I’m gonna do some journalism, confirm (or not) my understanding of University policy, find out what I can, and post what I find here. Look for edits and updates soon.]

[Edit 7 Oct 12:41PM pyrotechnics: I’m also just going to say that I do not support taking “revenge” on Beta through the use of physical violence. The very idea baffles and depresses me.]

[Edit 8 Oct 11:24PM pyrotechnics: And now on the Huffington Post. HuffPost notes that the national Beta Theta Pi office has responded by condemning the actions of the perpetrator and senior office staff have flown out to Connecticut. More updates as they roll in. Also maybe a new post. ]

[Edit 27 Oct 6:17PM pyrotechnics: New, very much relevant article that everyone should read.]