“NAPS OF THE FUTURE. TIRED IS A THING OF THE PAST!“ 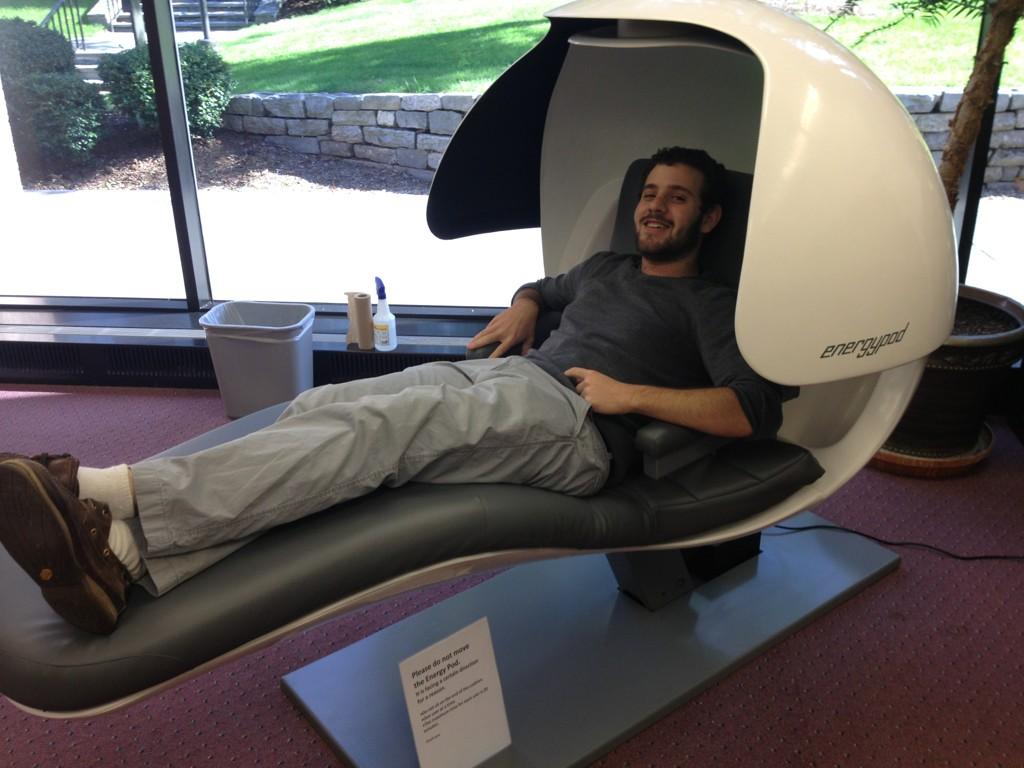 They went ahead and replaced all the rickety old chairs in Olin, but what are they doing to help you take power naps in the library and get your required six hours? A lot, in turns out. In fact, there are now nap machines in Olin and SciLi. Your friends aren’t messing with you—this is for real.

An anonymous tipster writes in with the fantastic news:

There is a nap machine being installed in Olin!! Take your robot naps now! 20 minutes with lights and soothing vibrations. It’s on the main floor and the guy installing it seemed to think it was permanent. NAPS OF THE FUTURE. TIRED IS A THING OF THE PAST!

They’re called “Energy Pods,” as it turns out, and they were created about ten years ago by two ’90s alums, Christopher Lindholst ‘97 and Arshad Chowdhury ’98. The machines were chronicled in a 2004 Courant article, which describes them as “disconcertingly futuristic-looking” (well, yeah, they’re called “energy pods”). In the article, Chowdhury boasts about their “visual and audio privacy,” because more privacy is precisely what is demanded in the Olin stacks.Photos below, interview with the installer after the jump.

According to a tipster, there’s a pod in SciLi as well as Olin:

Tom Kassel ’13 tipped me off to the construction of a chair SPECIFICALLY FOR NAPPING in SciLi (where a study table used to be). The SciLi librarian says it was invented and donated by an alum, so no, the school didn’t buy this instead of giving financial aid or
something like that. Apparently when it’s done your upper body will be in a pod with a timer, soft lights, etc. to customize your nap. Sounds awesome! Here are pics.

I managed to catch up with the Director of Operations for the company, Metronaps, for a quick interview just after he’d finished installing the Olin pod.

So tell me about these “nap machines.”

It’s called an “Energy Pod,” and the name of the company is Metronaps.

What’s your involvement with Metronaps?

I’m the Director of Operations for Metronaps. I work directly for the founder of the company. He invented it; he did all the research on napping and sleep.

And he’s a Wes alum?

Can you explain how it works?

Sure. It’s basically a preset twenty-minute nap. On the key pad itself, it has an I-20 button. You just climb inside, you hit the I-20 button, the chair reclines, you’ll have a gentle vibration in the chair, some nice ambient lighting. And you have a visor that you manually close to close yourself in. Like I said, once you hit that I-20 button, the chair reclines, you have twenty minutes, you hang out, you put your iPod on. Trust me, you’ll fall asleep in there. Without a doubt.

It closes around you?

Well, you manually close it. Some people are claustrophobic. They just wanna leave it open and just chill out. They’ve been in business ten years. They’ve been in numerous corporations around the world. I don’t want to mention any names. But you can do a little research on Google and find out yourself where we are. A lot of the companies want to stay under wraps. I could say we’re at St. Leo’s College in Florida, and they’re doing phenomenal. They’re getting 24/7 use over there.

Here’s a video demonstration of Sophie Zinser ’16 using the pod in SciLi.

16 thoughts on “Yes, There Are Actually Nap Machines in Olin and SciLi”