I just wandered around Main Street for a bit, and boy is it deserted. I mean, like, the desert deserted. Sorry for the shakiness of the photos; it is kinda windy.

In the 30 minute tour I just took of Main Street, ‘twixt rain and wind and leaves hitting me in the goddam face, I met not a single soul. Oh sure, there were a few lonely vehicles cautiously crawling hither and thither, but not one other deigned to trod gingerly down the dreary lane on foot like myself.

I have decided to rename Main Street, if only temporarily, as Desolation Aisle. Much like the oft-neglected pet-product aisle at the grocery store, Desolation Aisle seemed to offer delights on every side, but instead greeted me with harsh, unappetizing dimmed lights and locked doors.

Seriously, everything’s closed. Even RiteAid is shut up. For some reason, though locked and dark, something near Thai Gardens is still playing that weird, tinny classical loud enough to be heard over the wind from a block away. The only thing open is the Middletown Police Department office, and MPD cars make up most of what little traffic there is.

There’s no damage that I could see, and no trees down except for a few small branches. Oh, and this. The wind is picking up though…

Speaking of which, do be careful if you choose to go outside. Gusts are currently strong enough to shove you a few feet sideways if you aren’t paying attention.

Mayor Dan Drew has ordered an 8pm curfew, and with good reason. If you do go outside, avoid walking under or near trees. I almost got hit in the face with a flying tree branch.

There was supposed to be a gallery for this post, but my phone spazzed and lost ninety percent of the photos I took. Instead, I can give a snap of the more or less abandoned Metro Plaze parking lot: 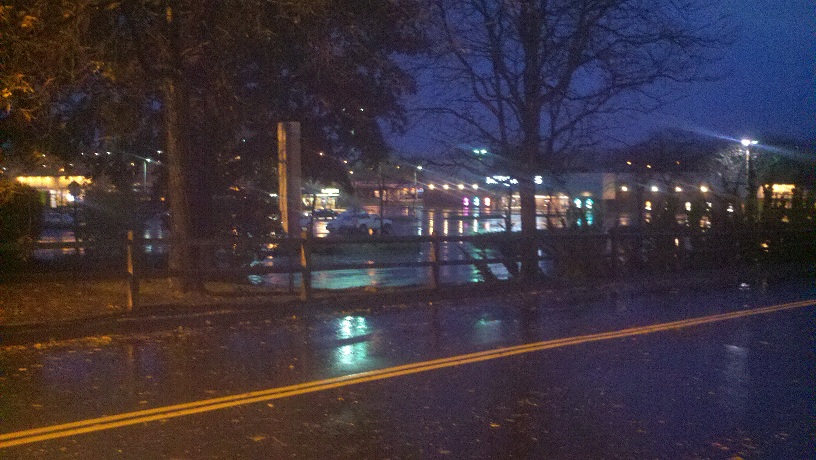