BriTANick is Brian McElhaney and Nick Kocher, two NYU acting grads who write and make hilarious YouTube videos to entertain themselves, according to their YouTube page. The above video features them along with one of the Wesleyan Film Department’s most well-known filmmakers (and satirical Romney supporter), Joss Whedon ’87 (if you haven’t seen Dr. Horrible’s Sing-a-Long Blog, by the way, get on that.)

I was introduced to BriTANick during my freshman year by fellow Wesleying blogger Solomon, who showed me Monologue for Thee (past the jump), one of their first (and also quite famous) videos. The video begins with a monologue by Shakespeare, Nick gets called in when a line is forgotten, and things swiftly get out of hand.

They later produced a sequel, called Monologue for Three:

And the short, but brilliant, Epic Phone Fail:

More recently, the two made Boy’s Night In, probably one of my favorites for the sheer absence of logic:

And a little less than a month ago, Dinner Party:

Enjoy! Here’s the link to the entire channel. 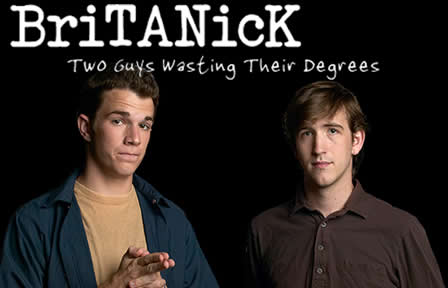