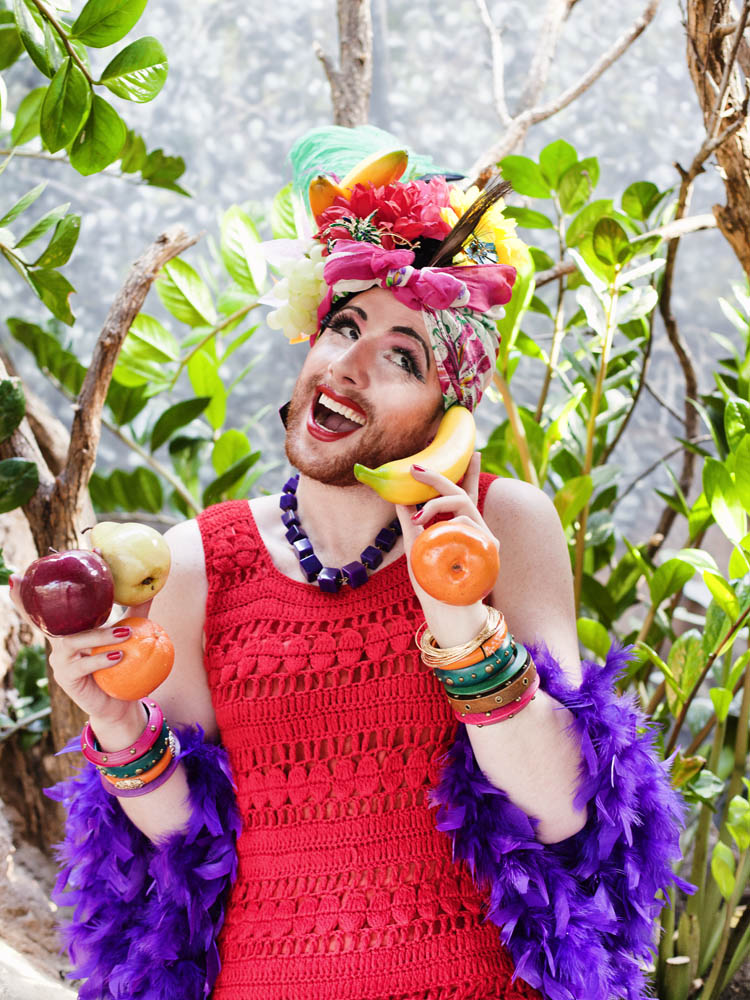 How about a little tropical flair to warm up your winter-like Spring Break?

Annie Shepard ’09 is the founder and main mamacita of the fashion photography website Neon Mamacita, and her latest project is a fabulous photoshoot featuring none other than Harry Hanson ’12. With photographer Aaron Colussi, they dressed Hanson in a pretty spot-on spoof/homage of Brazilian film and stage actress and singer Carmen Miranda— well, if Miranda had a beard. The bright surroundings are courtesy of the Bronx Zoo, where I’m sure random passerby gave a few confused stares at the trio before continuing on their merry way.

That signature tutti-frutti hat, which you have most definitely seen before, was famously part of Miranda’s outfit in the trippy, bizarre, but sort of awesome 1943 Busby Berkeley-choreographed musical, The Gang is All Here. And notably, her image was also co-opted for the weirdly colonialist and male-gaze-tastic “Chiquita Banana” commercials (which rhyme “equator” with “refrigerator” in a tune sung by Miranda, who plays the role of an animated banana. It’s so perfectly 1940s).

Below, watch Miranda’s performance in “The Lady in the Tutti Frutti Hat” from The Gang Is All Here, just to get caught up on your classic cultural references, and then admire the self-deprecating but totally hilarious photos from the more contemporary photoshoot.

According to Professor Ana Paula Hofling, whose Wesleyan class “Exotic Latin Corporealities” discusses Carmen Miranda for three straight weeks, Miranda would totally love the fact that she’s now a drag icon. The lady had a good sense of humor.