“Best night at Wesleyan by far, and pretty sure best night of my entire life in general!” –CantStopDancin (Wesleying commenter) 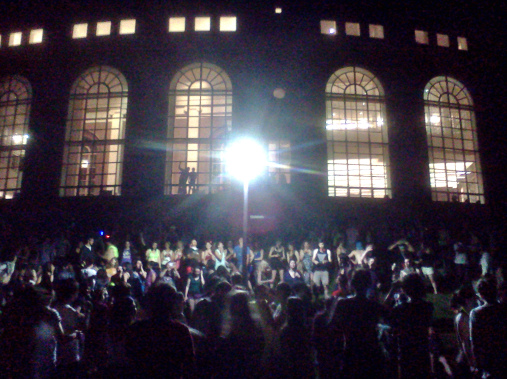 WesRave is happening for the third year in a row tonight, at 11 p.m. As BZOD has written in the past, it’s “Kind of like Tour de Franzia, only without the destruction and binge drinking.” Here is event info from the organizers, via the FB page:

1. THIS IS NOT TOUR SO DON’T DRINK PUBLICLY WHILE WESRAVING. Seriously.
2. We can’t go on the baseball field, we’d ruin it in about 2 seconds and that’s not fair to the staff who would have to fix it.
3. We can’t cross any streets, aside from Wyllys. This disrupts traffic and would involve Middletown Police, which we don’t want to do.
4. Please listen to the 40+ student shepherds who will be directing you, 10 of us will have gigantic racing flags to show you where to go. We’ll be talking with psafe as we move, and if we’re asking you to move/not go somewhere, it’s probably for a reason.

This is what goes down: everyone downloads a playlist onto their phone/music player. Download the playlist here. Convene on Foss Hill and press play at 11 p.m. Dance and run around campus (within the designated areas) for about two hours with hundreds of other Wesleyan students.