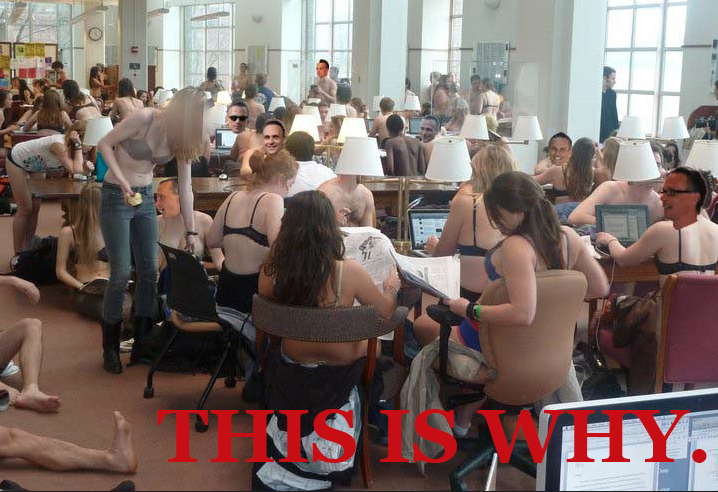 In two weeks you will arrive at Wesleyan University in a likely overpacked vehicle. As soon as you step out, you may be overwhelmed by the number of things going on around you. There’s the hundreds of other students moving in at the same time as you, the people who are eagerly welcoming you all and helping you move in, and the fact that you are now a college student with all of the freedom and responsibility that brings. Perhaps you’ll be unfazed by move-in and orientation week, but the fact is, you’re in for a hell of a ride at Wesleyan.

If you’re freaking out a bit, don’t fret! We’ve harnessed all your confusion and excitement into the Wesleying Unofficial Orientation Series 2014: a two-week long series of informative posts by bloggers in their underwear who sometimes claim to represent “real students, real student life at Wesleyan University.” We know that you’ll be too busy getting used to the term ‘cisgendered,’ man, and instagramming photos of your first Psi U party to learn anything between August 27th and August 31st, so we’ve got the following topics covered (in no particular order of importance):

You’re going to have a lot of things coming at you this fall semester: choosing classes, being bombarded at the student activities fair, exposure to seemingly weird ideas about how society should be, meeting a ton new people all the time, trying to figure shit out in general. Just take it in stride and know that there’s always going to be people to help out and understand what you’re going through, even if you have questions like “What is a grundle?” and “Does beer taste like pee?”

Questions about Wes? Post them as comments! You’ll probably get as helpful a response as on the WesAdmits 2018 group. Get excited!! You’ll be at Wesleyan really soon.