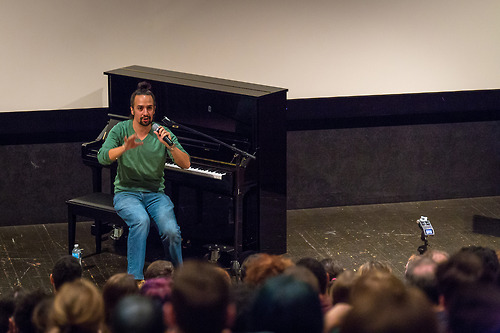 from the Wesleyan Photo tumblr

Last night in the CFA Hall, Lin-Manuel Miranda ’02 spoke about the origin of his Tony-award-winning 2008 musical In the Heights and other creative endeavors. The talk, entitled “When You’re Home: A Look Back on the Origins of In the Heights” and sponsored by the Theater Department and CFA, spanned everything from a musical performed in the Westco Café, Seven Minutes in Heaven–a 20 minute show about thirteen year olds attending their first unchaperoned party–to writing for the Tony’s to Like Water for Chocolate-inspired creative advice.

Lin started his talk with some background on In the Heights, which he wrote during his sophomore year at Wes, during which he lived in La Casa. The original performance, which ran for a weekend in April of 2000 at the ’92 Theater, was 90 minutes of “who am I?” angst, which “when you’re a nineteen-year-old Wesleyan student, you’re struggling with.” The plot, based both on his experiences growing up in Inwood, Manhattan and with friends and classmates at Wes, follows Lincoln, a closeted, aspiring musician who is in love with his best friend, Benny. Nina, Lincoln’s brother, is the neighborhood girl done good–”La Casa was full of Ninas”–who leaves NYC to attend Yale. Usnavi, who would become the narrator of ITH‘s current incarnation, was only in three scenes. Lin performed some songs from the original version, none of which remain, though some of the “musical landscape” and some specific chord progressions have made it to the current version.

Here is a recording of Lin performing the original finale of ITH; the chord progression was eventually used in “It Won’t Be Long Now.”

Lin didn’t touch In the Heights again until after he’d graduated, when the founders of Back Street Productions–John Buffalo Mailer ’00, Neil Stewart ’00, Anthony Veneziale ’98, and Thomas Kail ’99–began developing it. The show opened on Broadway in 2008, with Thomas Kail directing and Bill Sherman ’02 co-arranging and orchestrating. Quiara Alegría Hudes, who wrote the book, was a visiting writer at Wes in 2011-2012.

Lin also answered questions about his work on Bring it On!, based on the cheerleading movie, which he co-composed with Tom Kitt of Next to Normal fame, and about his time at Hunter College High School. Like Wes, Hunter’s great strength is, he thinks, the willingness of faculty to say yes to students’ creative endeavors whenever possible.

This closing number is just one example of work that Lin has done for the Tony’s. Neil Patrick Harris reportedly requested that he make the rap “harder.”

A highlight of the evening was Lin’s description of his upcoming musical Hamilton–about, yes, Alexander Hamilton–which opens on Broadway on January 20th. “Hamilton IS Tupac,” Lin said, going on to compare him to a slew of hip hop artists who rose from oblivion to make it before falling once again. Hamilton is narrated by Aaron Burr, who was one of Hamilton’s best friends… until he wasn’t. Lin, who will play the titular character (hence the top-knot), performed two songs for us: “My Shot,” an Usnavi-esque call to revolution right after Hamilton’s arrival in New York City, and a hysterical break-up song from King George to the U.S., the idea for which was given to him by Hugh Laurie while filming an episode of House, containing the lyrics: “And when push comes to shove, I will send a fully-armed battalion to remind you of my love.“

Lin performing a different (and possibly no longer in the show?) Hamilton song at the White House in 2009.

The remainder of the talk was mostly responses to audience questions about his creative process, and advice for artists in general.

On writer’s block: Lin urged us all to “take a walk,” because the good ideas will come back to you. If something isn’t coming the way you want it to, it’s not fully cooked.

On the process of writing a show:
Finding the characters and the story at the same time is really hard; this is why, he thinks, so many musicals are adaptations of already existing stories. As we can see from the evolution of ITH–which has had at least 60 cut songs–this is a back and forth process.

On being both an actor and a writer of a production:
By the time they get into rehearsals, the production team has had so much interaction that Lin trusts them implicitly. He can focus on being an actor, and has been lucky enough to have fellow actors treat him as such.
He fell into the role of Usnavi partly because it was easier than finding an actor who could learn the raps in time for a reading.

On emotional connection to your work:
“You’ve gotta be your first audience. If it doesn’t move you, it won’t move anyone else.” He referenced the scene in Like Water for Chocolate where Tita crying into her cooking causes everyone who eats it to feel the same: you have to cry into the sauce.

Wes’s faculty production of In the Heights runs from November 12 to 16 in the CFA Theater. Go see it!

Hamilton opens January 20, 2015 at the Public Theater in NYC. Go see that too, if you can!