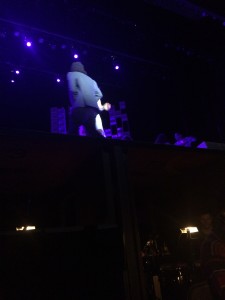 This semester, I had the pleasure of being one of the keyboardists for Wesleyan’s Theater and Music Department production of In the Heights — and, to be honest, I’m still not sure what happens in the show. All I know is that there’s a sassy hairdresser, a hilarious abuela, and a whole lot of frustrated people who really need just one thing to go right in their world to make their lives great. Like I said, I really don’t know what happens. From the pit, all I can tell you is that the cast has really great voices and incredibly rad shoes. But there are some other cool things I can tell you, considering I’m an In the Heights ~insider~, so here goes:

I had an awesome time being part of this show, and I hope everyone who came to see it already and who will come to see it later today (8 PM!) will love it as much as I have. Thanks for your support, Wesleyan, and enjoy the show!

3 thoughts on “In the Pit for In the Heights”