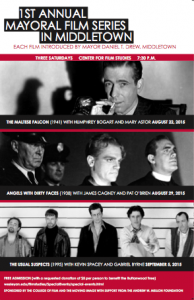 Your first Fun Thing to do in Middletown, CT, this school year:

Middletown Mayor Daniel T. Drew and Wesleyan University’s Film Studies Department are pleased to announce that they are partnering to offer the first annual Mayoral Film Series in Middletown. The series will consist of three time-tested, classical gangster movies and will commence with a showing of The Maltese Falcon on August 22, 2015 followed by Angels with Dirty Faces, starring James Cagney, on August 29, 2015. The third and final film screening will be The Usual Suspects, on September 5, 2015. Films will be shown at 7:30 p.m. at the Film Department’s theater located at 301 Washington Terrace.

Mayor Drew personally selected these films. “These are among my favorite films and each is both entertaining and informative. I appreciate the Film Department opening their doors to the community and I look forward to seeing people at the screenings.”

Jeanine Basinger, Corwin-Fuller Professor of Film Studies and founder of the film department at Wesleyan says, “We’re all delighted to work with the Mayor on this series. He is definitely a movie lover! All these films are crowd pleasers and the Mayor made great choices. It’s a pleasure for all of us at the Center for Film Studies to be able to present these films for the community.”

Admission is free, with a requested donation of $5 per person to benefit the Buttonwood Tree.