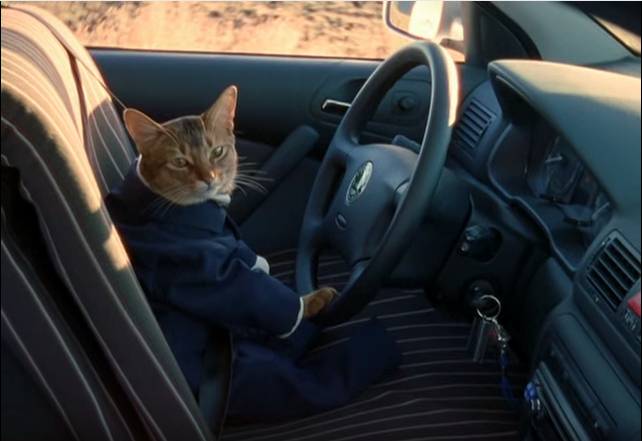 Yes, this is from Björk’s video for “Triumph of a Heart.”

If you have a car — lucky you. Most of today’s installment doesn’t apply to you, except that we’re all very jealous of your ready access to transportation. If you don’t have a car, consider making friends with someone who does.

As any current Wes student will tell you, one area in which Middletown is seriously lacking is its ability to help you get out of Middletown (not that you would ever want to of course). The closest train station is in Meriden, though your best bet for getting out of town is to go to Union Station in New Haven or Bradley International Airport in Windsor Locks (near Hartford). Getting there, though, is quite the challenge. At one point there was even a campus organization strictly dedicated to improving transportation. Lucky for you, we at Wesleying, and our friends at the Peer Advisor Blog, have attempted to compile a list of the car-less ways to get to Connecticut’s two main transportation hubs to make your lives easier.

The Rideboard, which you can access from your E-Portfolio, is super helpful in getting around by giving you a place to solicit (and offer) rides to your fellow Wesleyan students. Take a minute to check it out before you pay large monies to get anywhere. Right before breaks the various WesAdmit Facebook pages also turn into somewhat of a “Rideboard”, and though it’s annoying to scroll through dozens of people looking for rides, it’s  probably one of the best ways to find one. (There used to be something called WesCab, which put students in touch with student drivers to take them places, but it hasn’t been operating since February. Very :( indeed.)

Wesleyan and the WSA have partnered with ZipCar for a few years now, allowing us to have seven ZipCars on campus — one in front of Usdan, three in the Church St. parking lot, and three by the Butts. The ZipCar membership usually requires being 21 years of age, but they make a special exception for us college folk, so all you need is 18 years and a valid driver’s license. You can sign up here. Membership is $30 per year, and then the cars (including non-Wes ZipCars anywhere all over the States) rent at about $8 or $9 per hour (or ~$70 for a full-day booking) depending on the car. ZipCar covers gas, insurance, crash damage, and pretty much everything else so there are no hidden fees. If you are planning a full-day trip, then you’ll need to book a car in advance — the slots can get filled fast. Just like Athenian, ZipCars are available 24/7… need I say more?

The Ride is made up of vans that run a circuit around campus. You won’t typically have to wait more than 15 minutes for the next van at any given stop. You can figure out where each van is at any given time by going here, but most people just call the ride at (860) 685-3788. If they aren’t busy, they’ll come straight to your stop instead of completing their route first. In the wintry seasons (read: all year), the Ride can be a nice way to get home to the Butts without having to brave that long walk from the CFA, though I’ve definitely been lazy and cold enough to take it from Usdan to FauverBennett back in the day. On the weekends, there’s really nothing that beats showing up to a party at Psi U or Fountain fresh from the Ride as you watch all your friends stumbling on their sore feet as they walk in. It’s always smart to be on good terms with the drivers, they might just tell you where the party’s at.

The closest Megabus stops are in New Haven and Hartford. If you book your ticket in advance, you could pay as low as $1!  The New Haven bus only goes to Boston and Hartford while the bus leaving from Hartford goes to New York and Boston as well as Burlington, VT and Amherst, MA. One anonymous commenter educates us all on how to get to the Megabus bus stop in Hartford from campus (takes about 40mins). “Take the CT Transit 55 bus to Hartford from the Main Street station in Downtown Middletown. The bus costs 1.25 and accepts dollar bills and exact change. Get off at Downtown Hartford & OLD State House. Walk one Block north to Constitution Avenue and Arch Street where the Megabus departs.”

In recent years, Wesleyan has provided buses ($30 one way) to New York (Penn Station/Grand Central) and Boston (South Station), as well as to New Haven ($15 one way) and Bradley Airport ($20 one way) for most breaks. Thanksgiving break even features a bus to Philly and DC ($130 round trip). Aside from the massive traffic that inevitably plagues the New York bus due to the evening rush hour departure time, these shuttles are probably the easiest way to get to and from these major cities. Just be sure to book your ticket at least a week in advance, or else you won’t be going anywhere.

Taxis aren’t nearly as expensive when you split the fare with other people. If you’re going to/coming back to campus from New Haven train station or Bradley airport at a time when most people are traveling, there will always be someone to split the fare with. Even if you have to be that person who asks around on a WesAdmits page, it’s better than waiting around for a Wesleyan shuttle to come.

Here are some more specific directions to common destinations:

The Middletown-Hartford bus does not leave from the Middletown Area Transit terminal on Main St., but rather from the intersection of Main St. and Union St. (right where Main becomes Crescent St.). It also only runs on weekdays.

(Frosh, fear not: Wesleyan runs a shuttle to Bradley before and after Thanksgiving, winter, and spring breaks)

There is also the Wesleyan shuttle to and from the New Haven train station. It leaves the front of Usdan every Thursday and Friday at 6:00 PM, Saturday at 10:00 AM, and Sunday at 4:00 PM. The shuttle then departs from Union Station at 7:00 PM Thursday and Friday, 11:00 AM Saturday and 5 :00 PM on Sunday. Tickets cost $10 per person one-way except on breaks when it’s $15 .Reservations need to be made at the Usdan box office by 4:00 PM on the day that you plan to leave. You can also take a train from Meriden to New Haven.

Itching to get off of campus and take a trip to the mall? You’re in luck, the Westfield Shopping Center in Meriden isn’t totally inaccessible without a car! MAT’s M-Link leaves weekdays every hour on the half-hour from 6:30 AM-2:30 PM, and then at 3:45 and 4:45. It’s about a half-hour ride from  Middletown to Meriden (though according to the schedule, trips that include mall runs take only 20 minutes). Amtrak’s New Haven-Springfield Shuttle makes four weekday stops in Meriden: 8:08 AM, 11:28 AM, 5:04 PM, and 8:18 PM. In addition, one Northeast Regional train stops in Meriden at 6:56 AM, and the daily Vermonter makes a stop at 3:56 PM. It’s $8.50 to get to New Haven on the Vermonter and $5 otherwise; the trip takes roughly 30 minutes.

Some other notes: First, if you’re going north of New Haven (such as to South Station), you still have to take a train to New Haven and then another train from New Haven to your destination. Also, keep in mind if you get an Amtrak ticket from Meriden, there will probably be a $15 express delivery charge on top of the fare. The Meriden station ticket office is open from 6:30 AM-11:45 AM and 12:45 PM-3:00 PM weekdays only; if you’re leaving outside of those times, you won’t be able to pick up your ticket at the station, and instead you can call the amtrak phone number to get your reservation number and then pay on board the train.

**Did I leave something out? Did I get something wrong? Wanna give me a ride? If you have a car, I’m always looking for more friends (with cars).  Write in the comments as these fine people have done in the past posts above.

TLDR — Make friends with someone who has a car. Or don’t. Scan through the post for relevant info and you’ll be just fine. If not, let’s all bring back “Wesleyan Student Advocates for Transportation”.