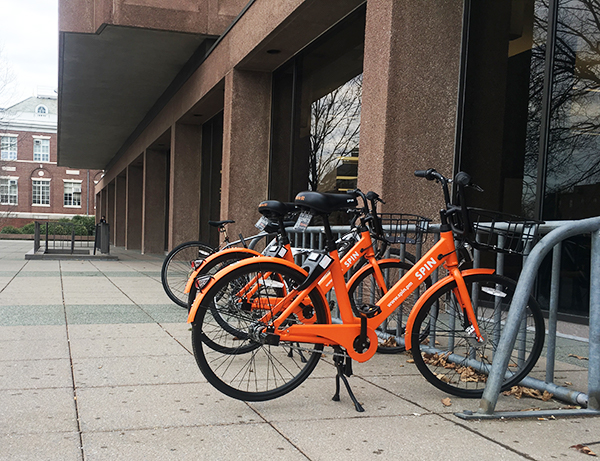 Sometime just after midnight on Wednesday, April 11th, a flock of yellow Penske trucks made their way onto a quiet and peaceful Wesleyan. In the frigid night, illuminated by nothing more than the orange glow of nearby streetlights, they began unloading their cargo: 100 orange bikes to be dispensed on bike racks around the campus.

And so, in one day, Wesleyan was given bike sharing. The concept is simple: you download the app, you add your credit card, you scan a bike through the app, it unlocks. What makes this form of bike sharing kind of cool and convenient is that when you’re done riding you can park your bike literally anywhere, or at least somewhere responsible and on campus as outlined in a nice little announcement email sent to everyone on April 10th.

The idea is super exciting. Now I can wake up just a little bit later to get to my class on the other side of campus, or better yet I don’t have to be late to class when I’m given only 10 minutes to walk from Exley to the CFA and the class in Exley went over.  I’m sure people living in program houses on Washington and the end of High street will be pleased as well, not to mention those who make the trek out to Long Lane.

So what’s the issue? Rides are 50 cents for the first 30 minutes(so a 3 minute ride is the same price as a 30 minute ride).  It seems like an amazing deal, and it would be if you literally only use bikes to get from your program house on the outer bounds of campus to Usdan. Otherwise it doesn’t seem worth it. If I rode my bike all day to go to and from class, to and from lunch, and to and from work I’d easily end up spending $4 in a day, do that every day for a week and I’d end up spending $20 in that week plus a little more for wherever I’m going on the weekends, which is all good and fun until you realize you don’t have $20+ to spend a week on bike rides you don’t really need since this campus is so small anyway.

The company counters this issue by offering unlimited plans where they give you the option to pay a flat fee ($14 for one month, $29 for three months, and $49 for a year) for unlimited 30 minutes rides.  While this does ease spending significantly for people who want to bike a lot, the issue still exists that Wesleyan is still a pretty tiny campus and most rides from one point to another won’t take more than 3 to 5 minutes whereas their walking equivalent would only take 5-9 minutes, not a huge sacrifice to make.

On the topic of where you can ride it’s also worth keeping in mind that Wesleyan, in the East, West direction is a fairly uphill school.  So, while getting from Butts to Usdan is no problem, getting from Swings to Bennet or Westco is a different story. I wonder if this means bikes will naturally trend downhill as people living in the High and Low Rise begin riding bikes to get back to their apartments and then don’t ride them back up the hill.

Also, isn’t it cool these bikes showed up conveniently at the height of WesFest? We’re such a cool shiny school! Just some food for thought.

The thing is though, I love these bikes. I hope the concept gains popularity and we begin seeing them around cities.  I’ll definitely be riding them around Wes because I love riding bikes, but I honestly don’t see their applicability to this campus. Bikes do not equate to fulfilling promises of sustainability if everyone was just walking before anyway.

I think some issues could be solved if Wesleyan or the WSA were willing to fully subsidize the program and make the bikes 100% free for students; until then I’m interested to see what level of popularity these bikes will take.

@spin.pm will this get my article featured on your Spin in the Press Page?