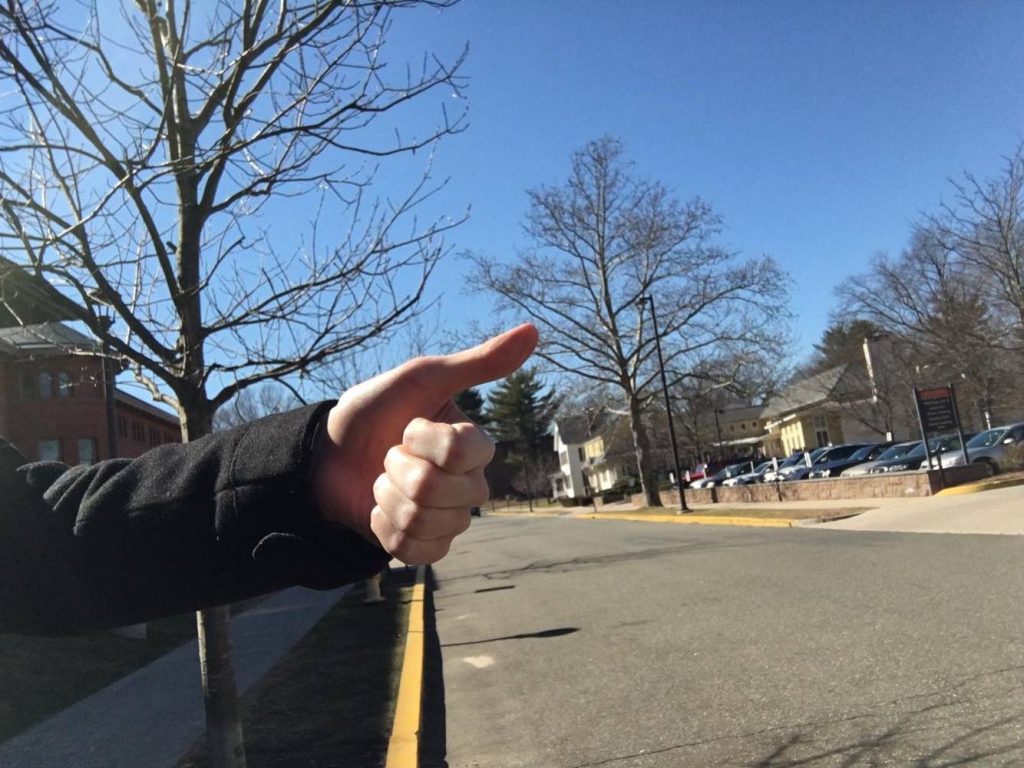 Transportation away from Wesleyan can be a tricky feat for someone without a car.  But should you want to someday escape the magnetic beauty of Wes or the general Middletown rest assured there are in fact options for you.

Connecticut does to some extent live up to its name. This year more than ever in fact with a new CTRail Hartford Line operating between New Haven and Springfield, MA and with future updates to the M-Link Express Route planned by Noah Kahan ’19.

In this article I will lay out for you all the different modes of transportation available to you at all different price points.

It’s not a real Wesleyan thing if it doesn’t have “Wes” before it.  WesRides a Facebook group where students can request, offer, and propose splitting Ubers/Lyfts. It’s mostly used for getting to New Haven and sometimes Hartford. Before breaks however it also gets used for rides as far as New York, Boston, and occasionally Philadelphia. If you need a ride anywhere at any time it never hurts to ask on WesRides first because who knows.

There is also a WesRides app that was made last year by Dan Tran ’20. It’s unclear how much this app is used as there is still tons of activity on the Facebook group whenever breaks come around. It would be nice if it caught on though because it would really streamline the whole WesRides process.

WesGo is a 3-year-old, student-run service with which you can sign up for rides from fellow students to New Haven, Meriden, or Bradley Intl. Airport. Whenever a break comes up a link to the google form is posted, but I’ll just put it here (it’s the same link all year, every year).  WesGo is a great alternative to using Uber/Lyft or getting a taxi.

A cool tip: You can compare accurate prices between the two services without opening both apps on Apple Maps (if you have an App device).  Simply search for the directions between two places (i.e. Wes and New Haven Union Station) and then switch your mode of transportation from “Drive” to “Ride”.

The Ride is a Wesleyan run shuttle service, you’ll see them often doing their runs about campus in the easily recognizable “The Ride” vans, but I’ll talk about the more later.

The Ride offers a weekend (Friday-Sunday) New Haven shuttle. Tickets must be purchased in advance, cost $10, and are available online or at the Usdan box office. The van only departs and returns once each day of the weekend. See the timetable below (copied and pasted from here).

Whenever break comes around Wesleyan offers a bus service to:

If you have a car you’re allowed to bring it and park it on campus in designated lots.  You’ll have to buy a parking permit from PSafe for $75, this is done online.

A new rule for the class of 2022 and on is that first-years cannot bring cars to campus. This was done in an effort for sustainability.

Sophomores, Juniors, and Seniors have more options including the K, M, V, and W lots and Senior house driveways. I’ll leave the link here to the PSafe page which includes a map of the campus parking lots.

Yayyyy public transit! Busses are great for getting you from one place to another if you have a  little bit of time to spare and are trying to save a bit of money.

Middletown Area Transit (MAT)  now shows up under the transit tab of Google Maps when you search directions (Edited 8/7/18), or you can look up their routes and schedules on their website.

CT Transit, the Connecticut state bus/train agency, has some really great busses as well including ones that’ll bring you from Middletown to both New Haven and Hartford.  CT Transit is searchable on Google and Apple maps so planning a trip is pretty easy.  I personally like to use the Transit app that comes with a few other cool features like live bus tracking.

Sadly there are no stops for big buses in Middletown but if you can get yourself to New Haven or Hartford you can take a big bus to anywhere big busses go. Fares can range from $1-30 depending on where you need to get, the day of the week, and how far in advance you buy your ticket.

As mentioned before, you can take the CT Rail Hartford Line to get from Meriden to New Haven/Hartford. A helpful note from the TipBox:

The MetroNorth train stops at Union Station in New Haven and travels south to New York. A one-way ticket to Grand Central during peak time is $23.50 and during off-peak it’s 17.75.  This is a very viable way to get to New York from Wesleyan.

Amtrak is another travel option but can often be pricey (looking at you Acela).  There’s a station in Meriden that serves the Northeast Regional (Boston to Virginia) and the Vermonter (Vermont to DC), but most of the time the train from Meriden will bring you to New Haven where you’ll have to transfer. Trains are comfy though.

If you have your license but don’t have a car Zipcar might be the way to go if you miss sitting behind the wheel. It’s basically a convenient car rental service. Cars are parked in designated Zipcar spots (in the lot by Admissions) and as long as they’re available you can reserve them through your account online. Student memberships cost a flat $15 per year membership fee and then $7.50/hr and $0.45/mile (after your first 180 miles each day).

Taxis are much like Ubers/Lyfts except they can be convenient if you’re trying to get to the airport at 3 in the morning and want to make sure someone will actually be there to pick you up.  Splitting a taxi will help greatly with the price. Some Middletown Taxi services (like Executive 2000) will also ask if you’d like to travel with other students leaving around the same time for this reason.

Omg dockless bike sharing?! Yes, indeed. Not so much for leaving campus, but if you need to get from one side of school to the other in under 2 minutes look no further.  The cost is 50 cents a ride so if you plan on riding a lot it might be worth buying a monthly, quarterly, or yearly plan. You can see our thoughts here.

Edit 8/6/18: A section on CT Transit Hartford Line was added with a comment from the TipBox

Edit 8/7/18: The Bus section was updated to reflect that Google Maps does show Middletown Area Transit routes/times now, as shared with us by a friendly TipBox-er!