“This is why we are at a University,” Prof. Mary Alice Haddad, Chair of CEAS, prefaced at the panel on the Hong Kong protests, which featured Hong Kong students Joy Ming King ‘20, Bryan Chong ‘21, Jeff Cheung ‘21, and Shirmai Chung ‘20. Because similar events have caused unrest and violence on other school campuses worldwide, Prof. Haddad saw this panel as a test for Wesleyan; hoping that we can discuss the Hong Kong protests and equally important topics with mutual respect and awareness.

She drew particular attention to two posters in the High Rise elevator, which were defaced on two separate occasions in the couple of days leading up to the panel. Someone had taken the effort to put “China” next to “Hong Kong” at the end of each panelist’s name and later returned to put the word “gay” next to where “China” had been. 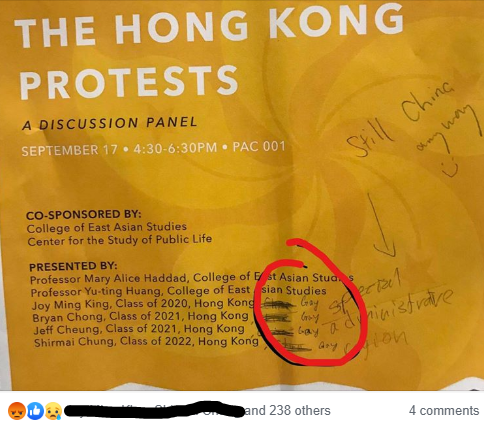 Chong responded civilly and hopefully in a WesAdmits 2022 post that took the high road, writing:

This level of insensitivity and disrespect is disappointing, but not by any means shocking. With every political movement comes discourse, often caustically worded out of anger or ignorance. While we cannot and should not agree on everything, we must be mindful of the manner in which we approach such issues, and the defacing of the posters violates a baseline understanding of respect. The panel began with a brief summary of Hong Kong’s history (which you can read more about in Argus articles 1, 2, and 3) by Prof. Haddad, which was followed by a sincere plea from Prof. Huang, CEAS, for the audience to patiently listen to the panelists’ narratives.

Now continuing over 200 days, the protests have brought about different perspectives, which panelists sought to present. In addition to their own involvement, they also covered how they interpret identity, fear and the white terror, the youth, peaceful protest and work of NGOs, and the narratives of under-represented groups like housewives and domestic workers. Chung identified as part of the more peaceful faction of protesters, who have suffered from underrepresentation in Western and Eastern media alike. She condemned the media framing of the protests as an “us vs. them” struggle; when in fact, there was much more nuance in the conflict. All panelists expressed concerns with current media portrayal of different identities and narratives. “Divides are manufactured,” said King, stressing that the divide between Hong Kong and mainland China is exacerbated by media portrayal and speculation on the future of democracy in China. The panel brought up a question we must ask ourselves: how do we have a conversation about the preservation of identity, peace, and a political system? How can we honor various identities and voices in a media portrayal without favoritism and exclusion?

Chong introduced the concept of “white terror,” meaning state-created culture of fear, which was virtually absent from any article written on the protests. A specific example he detailed was the July 21 Yuen Long Attack, where gangsters in white shirts launched a violent assault on news reporters, protestors, and even pregnant women for hours. The police remained ignored and rejected repeated 911 calls, and shuttered precincts when people reported in-person. Chong pinpointed the attack as the event that “single-handedly radicalized the entire movement,” his urgent voice expressing the senselessness of the situation, and exclaimed that “blood was spilled and nothing was done.” Students repeatedly brought up the idea of power imbalance: Who comes into power? Why do we trust those in power like police officers to maintain public order? What happens if the rules of public order are unjust and excessive?

From a humorous clip of young protesters tapping each other on their helmets, Cheung ‘21 made a heartfelt appeal to the audience: “They are just kids. At the end of the day, they need to go back to their families.” He posed a question regarding why young people feel the need to bear the responsibility of protesting, to which the answer lies: “If one day Hong Kong no longer exists, I wish you can remember the dignity of us.” He further emphasized the love for and desire to protect his home. Both Cheung and King spoke of the protests as a community effort: social workers would provide safe houses for young protesters to avoid darkness, NGOs help clean up and distribute food, and protesters use social media as a means of staying organized and supporting each other’s mental and physical well-being.

During the Q&A, one student raised how strange it is for them, an international student from mainland China, to be able to see the media coverage from both sides. They explained China’s propaganda, which described the police as “brave soldiers” and the protestors as “terrorists,” and that China has to to protect their identity. Another student wondered how to reconcile their Chinese identity with their support of the protesters, and explained their discomfort in seeing Hong Kongers burn and dispose of Chinese flags; the panelists recognized how the discrimination could go both ways. However, the student asserted that many mainlanders support the protests. Ultimately, both Hong Kong and mainland students agreed that this discussion could be a way to break the ice and facilitate future cross-conversation.

Prof. Haddad opened the panel with a hopeful statement about our values as a community: To be at a place like Wesleyan, we should know how to have respectful conversations and not belittle members of the community with immature slurs. In order to move forward respectfully, the “us versus them” mentality has got to go. We need to learn how to respect different identities maturely, like grown adults. This is indeed a test for us to see what kind of community we are, and I for one hope that our community can learn to be more respectful and thoughtful when having difficult conversations, or even when navigating beliefs different from our own.

( Sending... )
A.S.
(Sunday, Apr 5. 2020 08:32 PM)
I do not know your time zone Bryan, I believe my phone is compromised but the number is 860-344-9504. Staff can probably tell you more than I can. I left my number with someone but she has no phone for now. Thanks 4 caring.
A.S.
(Sunday, Apr 5. 2020 08:29 PM)
There was a blend of righteous anger and sadness, relief & hope expressed. Most up and down understandably due to an unimaginably difficult wait. Atheists don’t pray but I hope change comes 4 these.
A.S.
(Sunday, Apr 5. 2020 08:08 PM)
Folk outside the soup kitchen report they have been told they are going to hotels tomorrow. One person asked for your prayers on behalf of others with addiction that no one would be thrown out while working toward recovery.
A.S.
(Saturday, Apr 4. 2020 08:20 PM)
This link has been updated:
https://columbushouse.org/resource-center/news/urgent-message-cindy-fox-ceo/
Seems the warming center folks are hoping 4 hotel rooms next week. along with more folk in Wallingford.
Bryan Chong
(Wednesday, Apr 1. 2020 06:52 PM)
Hi April, this is Bryan with Wesleyan Democrats, Wesleyan for Bernie, and CT for Bernie. I am working with others (NEAT) to do some more fact finding about the Mtown situation so we can help. Please contact me at 2036043808