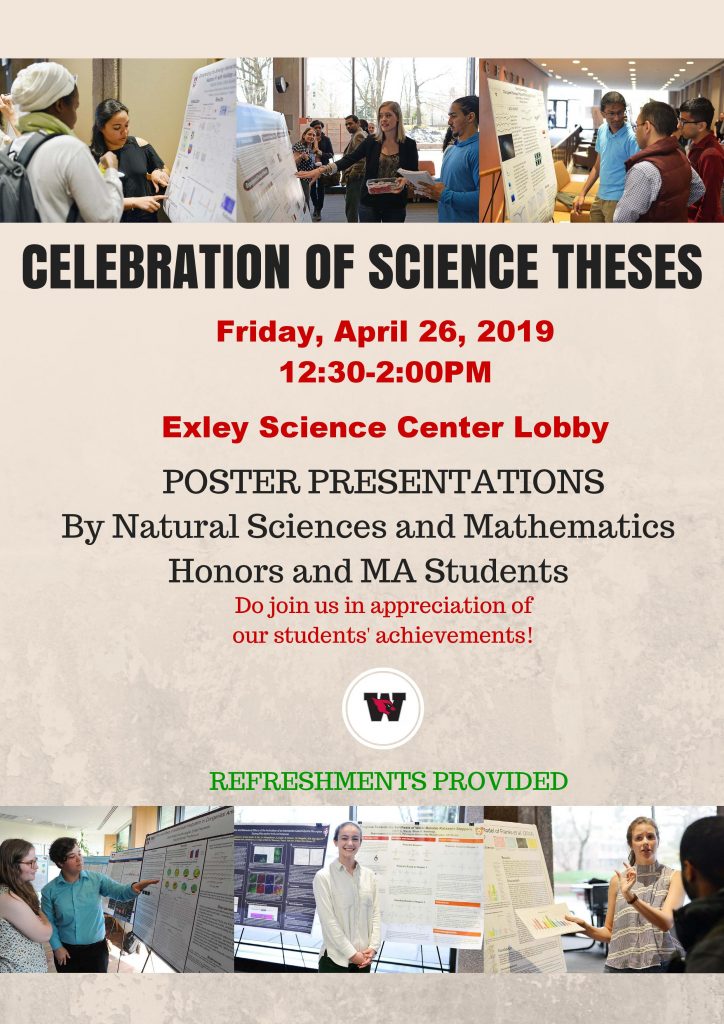 Professor Singer from the Biology Department writes in:

caroline working on her thesis in one of her many carrels 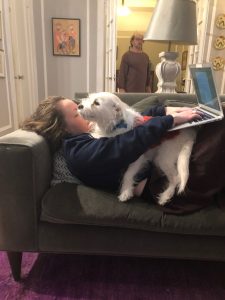 Welcome to the 7th installment of thesiscrazy!!!! This post includes interviews with Will Barr ’18, MA ’19, who is doing an MB&B masters thesis, we have Caroline Kravitz ’19, doing a local history thesis, Tomás Rogel ’19, doing a sociology thesis, and Lindsay Zelson ’19, doing a history thesis! Read past the jump to learn more about these wonderful, amazing, accomplished human beings :)

END_OF_DOCUMENT_TOKEN_TO_BE_REPLACED 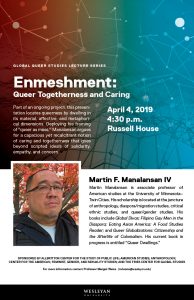 Join us for a lecture on Martin Manalansan‘s book in progress, “Queer Dwellings.” Deploying his framing of “queer as mess,” Manalansan argues for a capacious yet recalcitrant notion of queer caring and togetherness that goes beyond scripted ideals of solidarity, empathy and concern. Manalansan is associate professor of American Studies at University of Minnesota. His books include Global Divas: Filipino Gay Men in the Diaspora; Eating Asian America: A Food Studies Reader; and Queer Globalizations: Citizenship and the Afterlife of Colonialism. 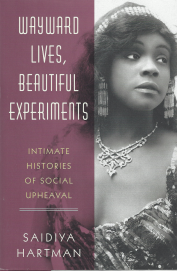 An exciting event happening this week!

Saidiya Hartman ‘84, Professor of English and Comparative Literature at Columbia University, is a scholar with interests in African American and American literature, cultural history, slavery, law and literature, and performance studies. She is the author of Wayward Lives, Beautiful Experiments (2019), Lose Your Mother: A Journey Along the Atlantic Slave Route (2007), and Scenes of Subjection: Terror, Slavery and Self-Making in Nineteenth Century America (1997). 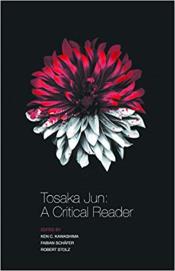 The Theory Certificate writes in:

Robert Stolz (NYU) will speak on the Japanese Marxist philosopher Tosaka Jun. Tosaka was a major yet underappreciated figure in twentieth-century theory whose work encompassed philosophy of science, philosophy of history, and cultural critique. His writings are comparable to, and resonate powerfully with, those of Walter Benjamin, Ernst Bloch, Herbert Marcuse, and other luminaries in the historical-materialist tradition. Professor Stolz will discuss his translation of Tosaka’s major text, The Japanese Ideology (1935), an original philosophical critique of fascism that, as Stolz puts it, “continues to shed light on the most urgent and persistent problems in philosophy and politics, especially the deep relationships between capitalism, nationalism, liberalism, fascism, and everyday life.” 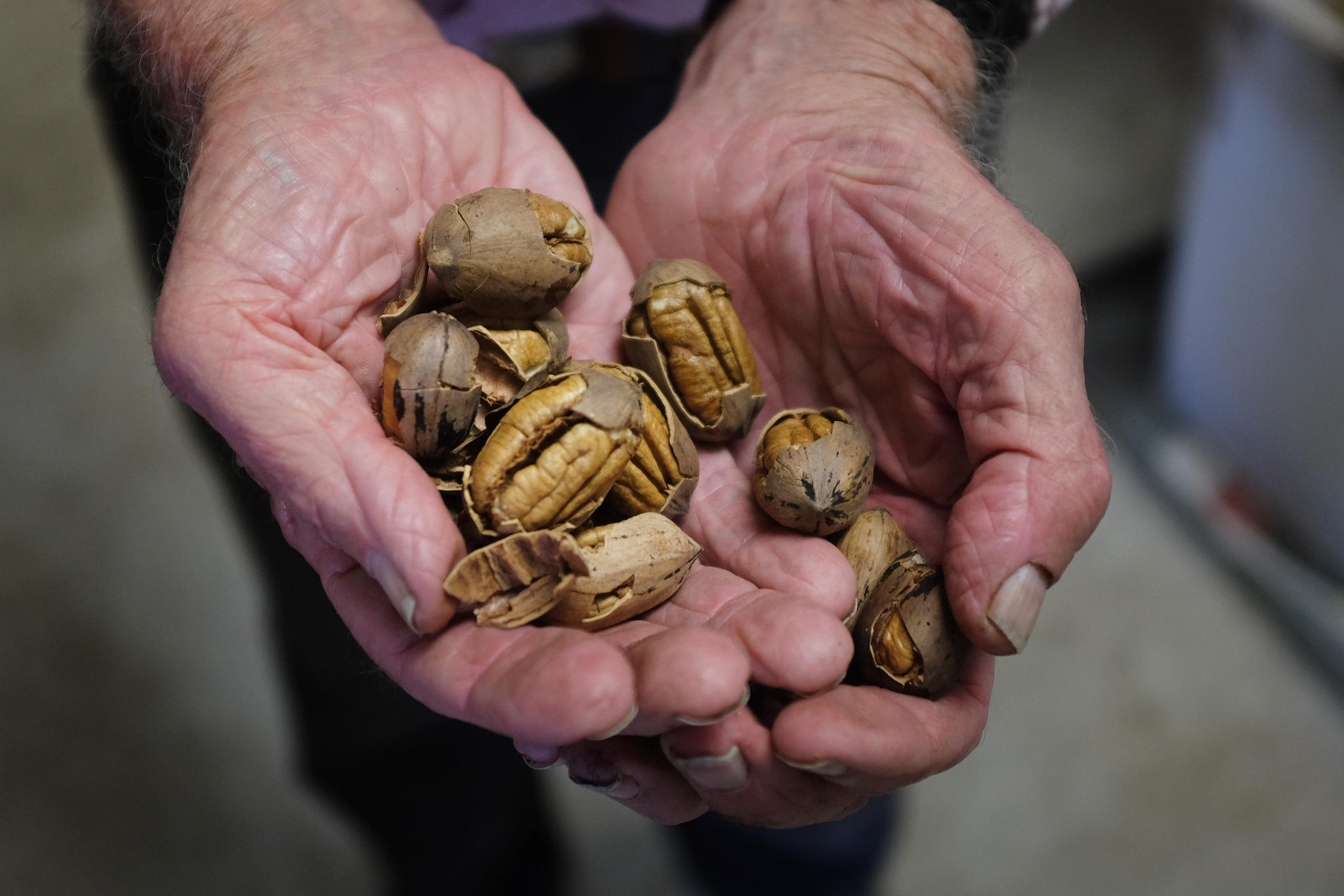 This fall, I taught a student forum through the American Studies department called “Critical Perspectives on Texas.” Historically Texas has served as a site of settler colonialism, racial domination, strict reification of gender roles and repressive sexuality, and economic importance with its oil and agricultural industries.

To name a few topics, the class examined: Texas’s modern-day electoral politics in sociohistorical context; intersectional feminist border studies and the Drug War; health care disparities, race, and climate change in Houston; gentrification and segregation in Austin; the legacy of plantation slavery in the influential Texas prison system; cowboy culture and the myth of the frontier; and indigenous resistance to the U.S.-Mexico border wall.

I grew up in Austin, Texas, and as an American Studies major, a growing activist, and someone who has become obsessed with regionalism since coming to Wesleyan, teaching this forum was a way for me to better understand my home and to help other students learn about the state through a critical lens. I wrote this piece, “Cracking Open a Pecan,” as a final project for our last day of class:

END_OF_DOCUMENT_TOKEN_TO_BE_REPLACED

As #FinalsSzn rapidly approaches/has already begun for many of us, Wesleyan has implemented some new policies which may impact how you address academic challenges this semester and in the future.

This afternoon, Dean for Academic Advancement Louise Brown in Student Affairs sent out an email detailing some changes to academic policies. If you haven’t been keeping a close eye on WSA agendas and committee reports (which are emailed out to the student body prior to weekly Sunday night meetings), you may have been caught off-guard by these seemingly sudden changes to policies that many students don’t even know exist. I do read all the WSA emails (bc I’m a big dork and like to look for fun things to report about), so I was vaguely aware of the new re-take policy, but I had no idea that the incomplete policy was changing.

Here’s a breakdown of what changed, what didn’t, and what it means for students and professors:

END_OF_DOCUMENT_TOKEN_TO_BE_REPLACED 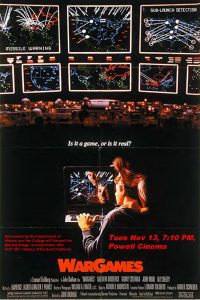 Check out this event tomorrow:

A screening of the Cold War sci fi WarGames (1983), featuring a very young Matthew Broderick as a computer nerd who nearly triggers World War III when he mistakenly hacks into a NORAD supercomputer simulation. Associated with HIST/SISP/ENVS 387: The History of the End. 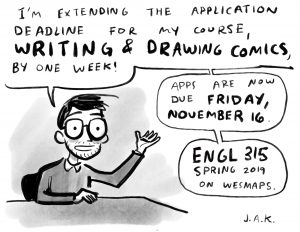 Apply to Writing and Drawing Comics!

This is an intensive workshop course for students interested in making comics. We will read comic strips and books that vary widely in genre and style, and learn to identify and emulate cartooning techniques.

The deadline to apply has been extended to Friday, November 16! To apply for this course students should submit an example of work that includes both words and images, 2-5 pages in length to jason.adam.katzenstein[at]gmail[dot]com. In person interviews will take place on Thursday, November 8 on campus, but Skype interviews can also be arranged. 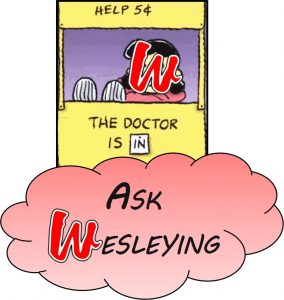 Welcome to the second installment of Ask Wesleying, an advice column about any and all things Wes! Have a question about life at Wes? Submit it to get it answered in Ask Wesleying! You can find all of the Ask Wesleying columns here. 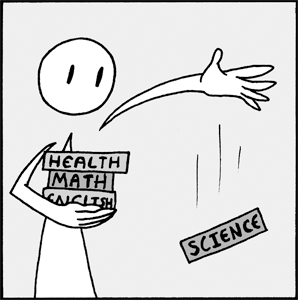 This week’s question is about withdrawing from a class after drop-add ends:

Is it a bad idea to drop a course in my first semester? Will it be hard to catch up on credits? Will it look bad?

You can read the answer to this week’s question below the jump!