[Updated, 4/2/17, 10:34PM] The post was updated to correct an error in authorship. This post was written by kitab and edited by wilk.

This February, the Victim Rights Law Center (VRLC) visited Wesleyan to assess our Title IX policies and procedures. Students were notified of their consultation in an all-campus email sent out by Antonio Farias on January 31st. There were three primary goals of the consultation, according to this email:

VRLC are charged with gathering information about the strengths and weaknesses of Wesleyan’s response to reports of sexual and gender-based misconduct, particularly:

Their 22-page final report was released on March 23 and emailed out in a classic Roth “Campus Update” this Wednesday. See after the jump for a summary of the report and some commentary.

END_OF_DOCUMENT_TOKEN_TO_BE_REPLACED

Early this morning, posters like the one above appeared around campus, calling out institutional protection of sexual predators. Many were removed shortly thereafter, but as of mid-morning, some remain.

The posters follow increased anger with the administration last semester for a variety of institutional failures. In particular, students and faculty alike have criticized the lack of transparency surrounding the firing of former Associate Dean of Students Scott Backer and, before that, the Title IX complaint filed by Associate Professor of Classical Studies Lauren Caldwell, which states that she was repeatedly sexually harassed by a fellow professor. Last October, more than 200 students at a town hall meeting reached consensus to push for the removal of Vice President of Equity and Inclusion Antonio Farias and University President Michael Roth from their positions at the University. That same month, over 30 professors issued a statement to the Argus, calling for independent review of sexual assault cases at the University.

END_OF_DOCUMENT_TOKEN_TO_BE_REPLACED

“Becoming a true sanctuary campus must be an ongoing and communal project and we urge every member of the Wesleyan community to contribute toward a collective effort to make our campus a place where international and undocumented students, faculty, and staff receive legal, physical, and emotional support.”

Ever since over 100 students walked out of class on Wednesday, November 16 to express support for a petition that pressed the Wesleyan administration to declare the university a sanctuary campus for undocumented students, the subject has been the focus of conversation for numerous groups on campus.

Several of the students who helped pen the sanctuary campus petition (which received over 1300 signatures) met with Board of Trustees members during the weekend before Thanksgiving break to discuss the proposal for the creation of sanctuary campus policies. Later that weekend, President Roth declared Wesleyan a sanctuary campus in a blog post. This made Wesleyan one of the first schools in the country to adopt the label. The post was picked up by The Atlantic, The Hartford Courant, and numerous other media outlets (yikes at The Daily Caller). Oh yeah, and it lead to this exchange between President Roth and Tucker Carlson on Fox News.

The question of what constitutes a sanctuary campus is still very much an open one. Over the break, there were conversations that called for more to be done than what was promised in President Roth’s post. One student remarked that President Roth’s blog post addressed none of the concerns around CAPS that were raised in the petition. It’s also important to note that the concerns raised in the petition regarding break housing and other medical and financial needs for undocumented students were also missing from Roth’s post. Along with many others, I share the position that Wesleyan’s status as a sanctuary campus needs to be implemented as something that lasts. This kind of lasting impact is only ever achieved through the creation of full-time paid positions, collaborations between faculty, students, staff, and the administration, and other factors that outlast the infamous institutional memory purge.

Many members of the faculty, while in solidarity with the decision made by President Roth, think there is more to be done to establish Wesleyan as a sanctuary campus. Seventy-six members of the faculty signed a letter to President Roth, the Board of Trustees, and the Wesleyan community calling for a series of measures that they think will better establish Wesleyan as a sanctuary campus. Read past the jump for the full text of the letter.

END_OF_DOCUMENT_TOKEN_TO_BE_REPLACED

Members of the Education Policy Committee (EPC) sent an all-campus email about the class time shift earlier today. The time shift would shift all morning classes 10 minutes earlier, and all afternoon and evening class times 10 minutes later. This would create a “common time” between 12:10 and 1:20 on Mondays, Wednesdays, and Fridays and between 11:40 and 1:20 on Tuesdays and Thursdays that will make it easier for faculty to schedule meetings and other things that faculty people do.

The time shift will be part of a pilot program for the next 2 academic years. The email mentions that the class time shift accommodates a time change in the University faculty meeting. The email is included after the break.

So, some initial concerns:

END_OF_DOCUMENT_TOKEN_TO_BE_REPLACED

Opening the second half of the evening is The Seven Deadly Sins, an inventive ensemble dance theater work choreographed and directed by Patricia Beaman. Radically re-envisioned as a production set in Weimar-era Berlin in the seediest of cabarets, this edgy Neo-Baroque work has been specially created for Wesleyan students as part of the “Repertory and Performance” course.

The Astronomy Department has invited Professor C. Megan Urry, the President of the American Astronomical Society and the Director of the Yale Center for Astronomy & Astrophysics, to speak at the annual Sturm Memorial Lecture this year. She will address sexism and gender equity in astronomy, science, and academia more generally. Urry is not only an expert in this field, but she is also notably the first tenured female faculty member in the history of Yale’s Physics Department.

Poster says it all!

NOTE: This event has been CANCELED due to snow. The original event text follows.

On Wednesday, February 5th at 8 p.m. poet Alan Gilbert and novelist Porochista Khakpour will kick off this semester’s series of Russell House readings.

Alan Gilbert is the author of two books of poetry, The Treatment of Monuments and Late in the Antenna Fields. His collection of essays, articles and reviews, Another Future: Poetry and Art in a Postmodern Twilight, was published by Wesleyan University Press in 2006. He is a visiting writer in Wesleyan’s English department.

Porochista Khakpour is the author of the novel Sons and Other Flammable Objects, a New York Times Editors’ Choice. Her new novel, The Last Illusion, will be published this spring. Her essays have appeared in Harper’s, The New York Times, Slate, and Salon, and she is the recipient of a National Endowment for the Arts Literature Fellowship. This semester she is a visiting writer in the English department.

Reception and book signing to follow the reading. For more information, please call 860.685.3448 or visit here.

5 professors will each give a ten-minute lecture on an idea that keeps them up at night, inspiring us to think bigger and better than ever before. So Wesleyan, are you ready to think BIG this semester?

TICKETS:
Tickets for this event are FREE and are being distributed through the Box Office NOW! Tickets have gone quickly in the past, so snap ’em up. This event is open to the Middletown, alumni, and parent communities.
2 TICKETS PER PERSON – get one for your friend, roomie, mom, dad, estranged relative, pet rock, etc.!!!

SPEAKERS:
SARAH MAHURIN (English): “What We Talk About When We Talk About Clothes”
MEREDITH HUGHES (Astronomy): “Life in the Universe”
JONATHAN CUTLER (Sociology): “What’s Left? An Unrequited Politics of Pleasure”
ANDREA ROBERTS (Chemistry): “Jury Duty, Stem Cells and Global Warming: The Importance of a Science in the Liberal Arts Education”
TUSHAR IRANI (COL): “The Value of Learning”

According to the Durham-Middlefield Patch, Laurel Appel, Adjunct Associate Professor of Biology, has passed away at the age of 50. In addition to her parents, siblings, and children, Dr. Appel, who lived in Durham, is survived by her husband of 20 years, Professor of Biology Michael Weir. The online obituary notes that Dr. Appel also directed the Ronald E. McNair Program at Wesleyan:

Laurel Frances Appel was born July 13, 1962, in Princeton, NJ, and grew up in Urbana, IL. She graduated from Oberlin College in 1984 and received a Ph.D. in genetics from the University of California at Berkeley in 1993, when she moved to Connecticut. She married Michael Weir in 1993. At Wesleyan, she directed the Ronald E. McNair Program, which supports and nurtures first-generation college students and students in underrepresented groups for entry into graduate programs.

Dr. Appel most recently appeared in the news last month, when the Wesleyan Connection mentioned her as a speaker for “Innovations: Intersection of Art and Science,” a CFA symposium.

There will be a celebration of her life tomorrow at 3 p.m. in the Chapel. Read the obituary here. 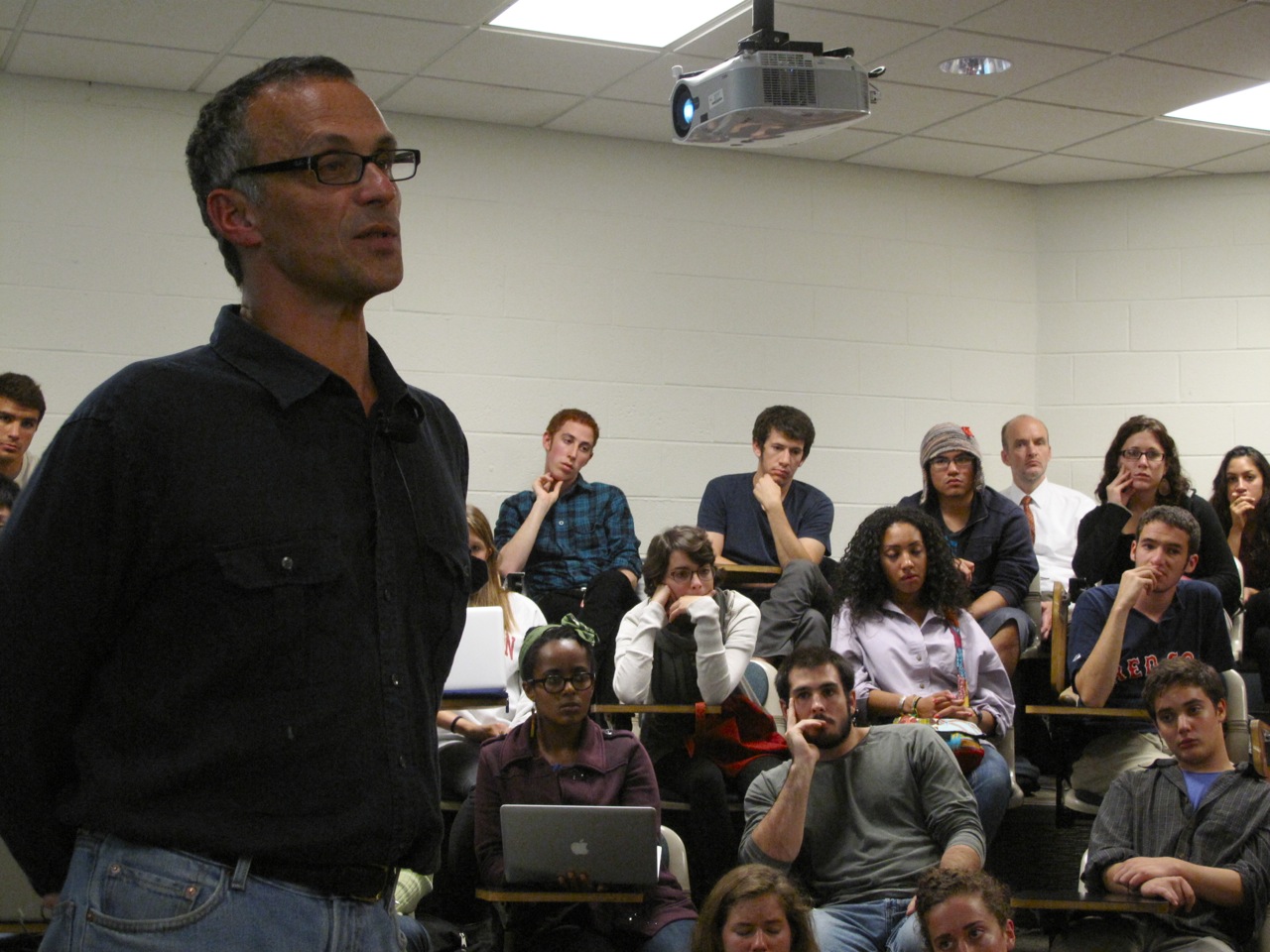