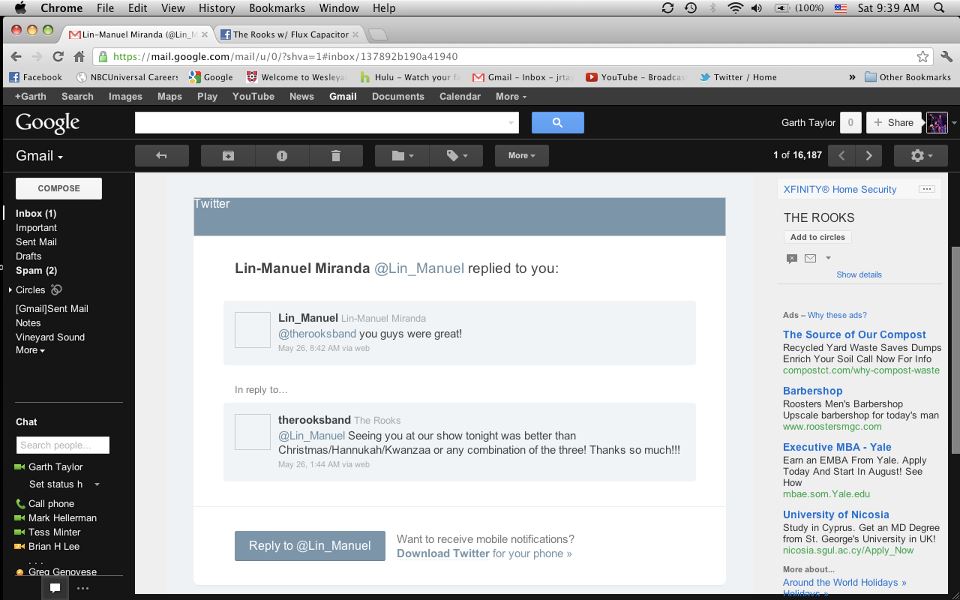 It seems like only a few months since playwright and In The Heights creator Lin-Manuel Miranda ’02 was last on campus, tweeting his every move up and down College Row. Last night, Miranda made his way to the Rooks’ Eclectic show and had this to say:

This morning, Miranda continues live-tweeting his escapades on Foss (“Listening to a cocktail of MGMT, Das Racist & Professor Neon on Foss Hill”), at Athenian Diner (“won these in the claw machine at Athenian”), and in the Chapel, where he will speak at noon at the Wesleyan Assembly and Alumni Association Annual Meeting (and where he claims to be writing his speech right now). He urges you to attend:

END_OF_DOCUMENT_TOKEN_TO_BE_REPLACED 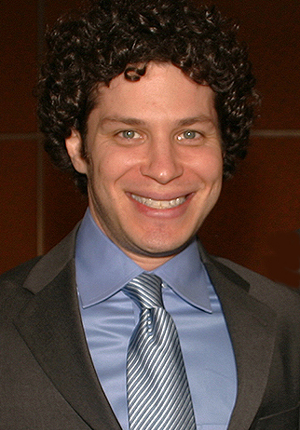 Rachel Berman of the Career Resquash Center writes in:

Join us at lunchtime in the Career Center for an informal conversation with Conversation with Thomas Kail ’99, Broadway Director, Musician, and Producer. Hear how Tommy followed his passion for live theater after graduating Wesleyan and wound up directing In The Heights, the 2008 Tony Award winner for Best Musical. Check out a clip of his new show, opening in New York.

Speaking of In The Heights, Quiara Alegria Hudes, who wrote the book for the play, just won a Pulitzer and Lin-Manuel Miranda ’02 himself recently popped up in Middletown for a brief rendez-vous with Hudes’ playwriting workshop. Coincidence? Maybe. 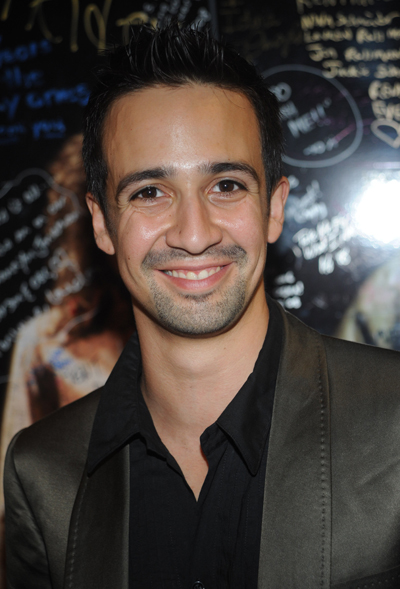 Tony award-winning Broadway musical with a movie adaptation in the works, check. Grammy award win, check. Co-founding a improvisational hip-hop comedy group that does really fun and dynamic shows, including one on our own campus last year, check. Sharing screentime on a popular medical drama with no less than HUGH LAURIE, check. Gig at The White House, check.

Ah, Lin-Manuel Miranda ’02. I love so much about the things that you choose to be (do?). And now, fresh from the Twitterverse, confirmation that he will soon guest star on one of everyone’s my current fa vourite television shows, Modern Family.

Read on for ~PHOTOGRAPHIC PROOF~ 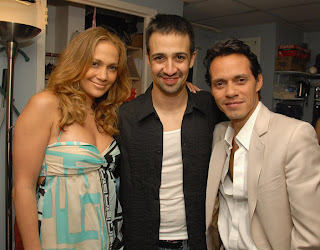 The New York Post reports that J.Lo is said to be courting producers about possibly staring in Lin-Manuel Miranda’s “In the Heights” either on Broadway or in the upcoming movie version. A friend close to Lopez said that she may be more inclined to star in the movie version as “Broadway shows are exhausting and time consuming.” Interestingly, both Miranda and Lopez are born and bred New Yorkers of Puerto Rican descent.

Thanks to Liza Conrad ’11 for the tip. 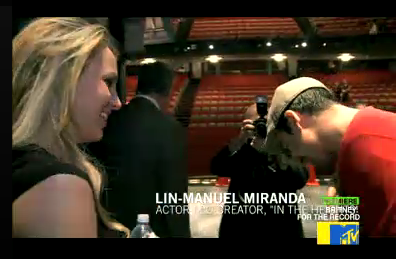 Though she’s been largely silent about her personal life in recent years, in the new MTV documentary “Britney: For the Record,” out last Sunday, Britney Spears opens up about K Fed, the head shaving and her breakdown.

Make of the film what you will, but at least watch this clip in which Britney goes to New York just to see In the Heights, the Tony award-winning musical created by and starring Lin-Manuel Miranda ’02 .

Highlights:
2:20- Britney meets the cast, shmoozes with Lin-Manuel
2:48– Britney’s post-show reflection: It was really good, I cried.
4:39– Britney goes out to dinner with 2 cast members, scores one of their numbers.

For those looking for a good study break, the 90-minute documentary is available in full on mtv.com. 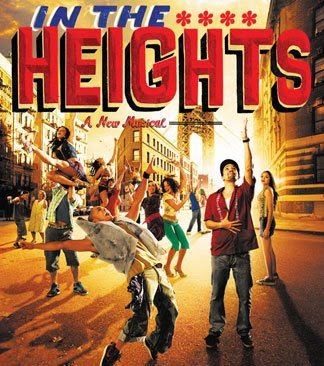 It’s been a great year for Lin-Manuel Miranda ’02 – after having won a bunch of Tonys for “In the Heights“, which he wrote the first draft of while a sophomore at Wes, and which opened on Broadway earlier this year, he’s sold the film rights of the musical to Universal Studios, who will probably make an international monster hit out of it:

Set over three days in the upper Manhattan neighborhood of Washington Heights, In The Heights is an exhilarating musical journey into one of New York’s most vibrant communities, where the lives of three generations come together in an unforgettable story of hope and self-discovery.

“In The Heights is a musical rich with storyline and characters that transcend the setting in which they are cast to entertain and speak to audiences from all walks of life,” said Donna Langley, President of Production for Universal Pictures. “We are thrilled to be working with Lin-Manuel Miranda to bring this fantastic story to the big screen.”

…“Nearly nine years into my journey with Heights, I remain constantly humbled by all the opportunities we have been given. I am thrilled to work with Universal and help bring this story to millions of people around the world,” said Miranda.

The original Broadway producers of the show, Kevin McCollum, Jeffrey Seller and Jill Furman, will executive produce the movie, and Quiara Alegria Hudes, who wrote the Tony-nominated book for the show, will be writing the screen adaptation for the film.

Miranda will will probably be reprising his starring role in the movie, though no official casting had been done yet. He’ll also be producing along with Meryl Poster, who supervised the film version of “Chicago” as an executive at Miramax.

I’m having a little Entourage moment writing this up right now, awesome, Wesleyan, for having some claim to this.

Wes alumni continue to pound out the blogs. Case in point: Himanshu Suri ’07 sends us a link to his new blog, Gordon Gartrelle, which is devoted to “contemporary Indian/Indo-Diasporic art, indie/hip-hop music, fashion, and humour.” It’s now in our Wes 2.0 blogroll; check it out! 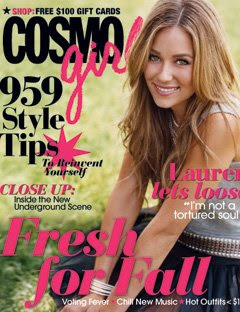 And it’s not just on the blogs that Wes alumni are active; it’s also in magazines targeted toward teen girls. A Wesleyan student spotted Jean Pockrus ’08 in CosmoGIRL magazine:

I came across an article called Living On the Fringe: Who Says We All Have to Be Into the Same Things? Meet Five Girls Who Share Passions That Thrive Outside the Mainstream. Jean Pockrus was featured as “The Freegan.”

The article quotes her: “Our culture drives us to consume so much more than we need. There’s always a newer model to buy, and people throw out perfectly good stuff—including food. Freegans reduce waste by reclaiming and repurposing discarded items instead of buying new ones—often by dumpster diving—and using what would otherwise be thrown away. A lot of my freegan friends are really great at turning discarded stuff into cool things like jewelry. We can’t eliminate all waste, but we can get creative about reducing it.” 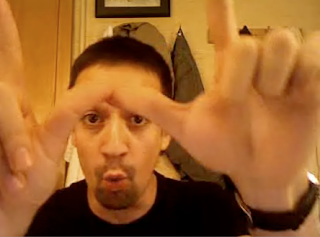 Meanwhile, Gwynne Hunter ’10 points out that Wesleyan has created its own Wesleyan on Broadway site to promote In the Heights, the hit musical by Wes alumnus Lin-Manuel Miranda ’02. Lin’s created a rap and Wes-centric promotional video for the special September 5 showing of In the Heights. Funds raised through ticket sales will support Wesleyan financial aid.

Finally, Jason Reif ’09 checks in from his internship at Rooftop Films, and would like to tell you about this New York-based organization that puts on a summer film festival, with events mainly in Brooklyn. There are movies, bands, open bars… and even non-rooftop venues. Check ’em out at RooftopFilms.com, or read the Rooftop Films blog (written by interns like Jason) at IFC.

Thomas Kail ’99, director of “In the Heights” and college buddy/collaborator of Lin-Manuel Miranda, was praised in the Boston Globe for his work directing another current play, “Broke-ology”:

Director Thomas Kail, fresh from the Tony Award-winning musical “In the Heights,” demonstrates an equal affinity for the nuances and rhythms of this tightly focused family drama.

Kail’s two assignments – big Broadway musical, four-character play in a black box – are less disparate than they might sound. Both “In the Heights” and “Broke-ology” focus on what it means to grow up in a poor but cohesive community, to leave it and to return to those who stayed behind, and to find a balance between honoring family ties and honoring oneself.

Thanks to Alissa Greenberg ’08 for the tip.
Wesleyan-alum-fueled musical ‘In the Heights’ just won the Tony for Best Musical! 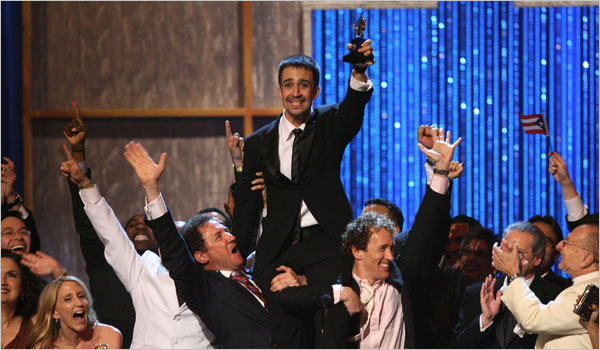 Theatrical mastermind Lin-Manuel Miranda ’02 (above) is really excited about it. The show was one of the biggest winners of the night, for choreography, score, and orchestration as well as best musical.

Miranda leads the cast of the show in a performance at the ceremony:

“In The Heights,” written by Wes alum Lin-Manuel Miranda ’02, was first performed in Wesleyan‘s own ’92 Theater in 1999: 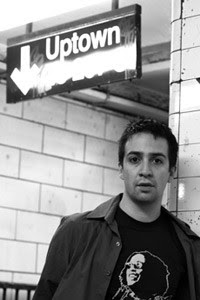 I wrote the first incarnation of In the Heights my sophomore year at Wesleyan University. In the winter of 1999, I applied to put up a new show in the student-run ’92 Theater. At the time, I had one song and a title: In the Heights. I was given the theater for the weekend of April 20-22—now all I had to do was write a show. I barely slept, I barely ate; I just wrote. I put in all the things I’d always wanted to see onstage: propulsive freestyle rap scenes outside of bodegas, salsa numbers that also revealed character and story. I tried to write the kind of show I’d want to be in.

Two remarkable things happened. One, we broke box-office records for the ’92 Theater that year—it was insanity. Two, I was approached by John Buffalo Mailer (son of Norman), a senior at the time. He loved the show and said, “My friends and I are starting a production company when we graduate, and we want to help you bring it to New York.” I said, “That sounds awesome,” went to the cast party and promptly forgot about his offer.

Nowadays, the show is being performed on Broadway. Today Tony nominations were announced, and “In The Heights” is leading the pack with 13 nominations:

“In the Heights,” an original musical written by a university student about life in a working-class New York neighborhood, led the nominations for Broadway’s top theater honors, the Tony Awards, on Tuesday.

Among the 13 nominations for “In The Heights” were best musical, best original score, best performance by a featured actor in a musical for Lin-Manuel Miranda, who also wrote the musical, and best direction of a musical for Thomas Kail.

Miranda wrote the musical, set in Manhattan’s largely Hispanic Washington Heights neighborhood, while in his second year at Wesleyan University and after graduating he and Kail reworked it for a larger audience. It first played in Connecticut before moving to an off-Broadway theater and then making its Broadway debut on March 9 this year.

We’re proud of you, Lin-Manuel!

There will be a special benefit performance of “In The Heights” to raise money for Wes financial aid on September 5 – check it out.

P.S. Apparently also the Broadway production is directed by Tommy Kail ’99, and arranged and orchestrated by Bill Sherman ’02.