Recent Wes grad Andy Werle ’12 returns with news of a fun, music-filled night in your future:

Callooh Callay!
Happy new year Wesleyan. Ishmael comes to Buddhist House this coming
Friday, the 8th of February with The Assortment Of Crayons for a night
of fanciful mind destruction and toothsome eardrum corruption.

Whet your appetite with Ishmael’s EP, for free right here and get to know your various colors with the Assortment of Crayons over here.

Update: This show has been postponed because of you-know-what. Here’s the note from the band.

END_OF_DOCUMENT_TOKEN_TO_BE_REPLACED

“We’ve been pregnant with this record for nine months, but this baby couldn’t wait any longer.”

When I caught up with Ishmael last month to talk about the band’s brand new EP, I asked about recording the whole thing in the dead of night at New York’s Tarbox Studios. “There was something indescribable about being so creative, and loud, while most of New York slept,” the band told me, “and it freed up our inhibitions so we could try some weird stuff.” “Feet Stomp,” the first tease from that EP, hinted at some weird stuff. It also hinted at the catchiest—and shiniest—pop music that the prog/funk/rock/whatever outfit has written yet. Who says 9/8 time signatures and Tool covers aren’t sexy?

This week the band, which includes Jordan Lewis ’13 and Andy Werle ’12 plus non-Weskids Nick Otte and Aaron Silberstein, finally delivers the goods. The EP, creatively titled Ishmael the EP (and previewed on the WEUS airwaves a few weeks back), is available online for $3.96 at iTunes (and coming soon to Spotify and, eventually, physical formats). At just over twenty minutes, it consists of four of Ishmael’s most diverse tracks yet, including

END_OF_DOCUMENT_TOKEN_TO_BE_REPLACED

Exactly three months after its triumphant rising from the ashes in the hollowed halls of Psi Upsilon Dormitory for Men, and approximately two weeks after announcing its upcoming EP (which was later previewed on the WESU airwaves), famed progalicious funksters Ishmael return to its native habitat: Earth House. Fabulous details from the band itself:

We will be giving a concert of music. Come listen to the music and to the other sounds. There shall be head banging aplenty.

As always, Ishmael is Jordan Lewis ’13, Andy Werle ’12, Nick Otte, and Aaron Silberstein. The show is free as funk, and there are no openers to be had.

END_OF_DOCUMENT_TOKEN_TO_BE_REPLACED

Guys, I know everyone’s pumped for dat yung Awesomefest the weekend after next, but what’s one to do if one needs a little awesome? If only there were somewhere we could turn to for something new, like the EP that band is recording with that guy. Imagine how sweet it would be to hear The Ishmayles on the radio! I know, it’s a silly pipe dream, but what else should I shoot for – finishing my homework? Fat chance. Wait – I’m getting a message from none other than Maggie Toth ’12! What could it possibly be?

So here’s the deal: Andy Werle, ’12, and Jordan Lewis, ’13, of Ishmael will be joining me on my radio show for a preview of their forthcoming EP in its entirety. My show is called 600 lbs of Sin [Ed. note: That’s sick.] and is on WESU from 1-2am on Monday Night (Tuesday Morning). People can listen in my heading to wesufm.org or turning their radio dial to 88.1. Also, if you could mention their upcoming show at Earth House (this Saturday at 10:30) that would be wonderful.

To quote economist and public intellectual John Kenneth Galbraith: “Word!” I’m pumped. If I see any of you at 1 AM and am not listening to the show, please remind me where I’m supposed to be! And keep an eye out for an event post on Ishmael playin’ one o’ their ol’ haunts.

“I heard they’re working with the guy who mixed Pearl Jam’s Ten.” “They’re playing exclusively in 9/8 time.” “Did you know they recorded it in the dead of night?’

The rumors, whispered at night between MuHo and Pine, are mostly pretty true. Ishmael, the prodigious prog/funk outfit whose numbers include Jordan Lewis ’13 and Andy Werle ’12—as well as Nick Otte and Aaron Silberstein—are readying a new EP. Fresh off a triumphant November gig at Psi U (all “bureaucratic bullshit aside”), the self-proclaimed “Frippian Euphoric Post-Funk” quartet has been working with Tim Palmer, the noted producer and engineer known for work with Pearl Jam, Ozzy Osbourne, David Bowie, and Porcupine Tree, among others.  The band recorded the EP over the summer, in the dead of night, at New York’s Sugarbox Studios. First single “Feet Stomp” is the first preview of what’s to come.

END_OF_DOCUMENT_TOKEN_TO_BE_REPLACED

“You can’t evict an idea.” So read one of the picket signs at Thursday’s protest (with more colorful lettering, I’ll concede), and that seems a fairly accurate summation of last night’s Eclectic/Psi U Ishmael Progrockstravaganza. When Ishmael‘s long-awaited homecoming with An Assortment of Crayons at Eclectic was cancelled at the last minute due to “bureaucratic bullshit” (disclaimer: I have no idea what went down), Psi U warmly invited the band onto the bill of its charity concert (disclaimer: I have no idea what went down). What survived was a thoroughly reinvigorating 45 minutes of proggy interplay, epic vocal acrobatics, twisted time signatures, and well-honed fuzz explosions. They don’t play at Wes too often these days (Earth House in September, MuHo last spring), but when they do, it’s really a delight. (“Lets still fuck this shit up!” indeed.)

As always, Ishmael is Jordan Lewis ’13, Andy Werle ’12, Nick Otte, and Aaron Silberstein. Photos of the set appear below. Additionally, the band is playing Brooklyn’s Knitting Factory on Saturday the 26th (that’s next week) and assures us that a release of sorts is soon to come. (Additionally additionally, if anyone has visual, aural, or verbal testimonies of the other bands who performed on the Psi-U bill [sadly, I don’t], cordially fill out our Comment Release Form below or write us at staff[at]wesleying[dot]org.)

END_OF_DOCUMENT_TOKEN_TO_BE_REPLACED

Your Best Bros are tryna getcha to “throw your weight around at the Ishmael show, this Friday night (11/18) at Eclectic!”: 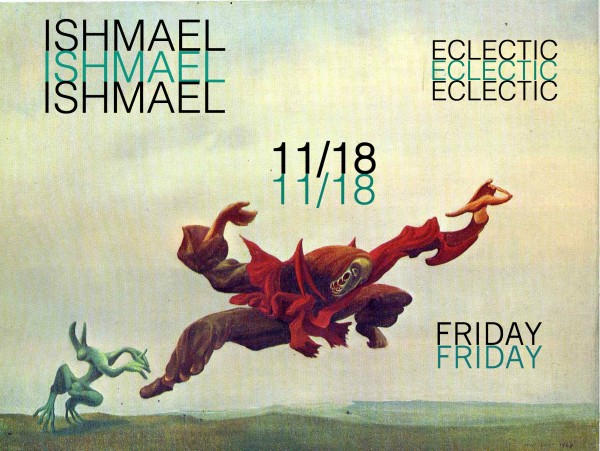 Expect to see things started off with The Assortment of Crayons (?!?!) at 10, followed by motherfucking Ishmael at 11. Bare your soul and face the book  here, or just kick back and have a blast.fm. If  you enjoy not paying money to watch/hear music, this might be an event for you!

Ishmael (Jordan Lewis ’13, Andy Werle ’12, Nick Otte and Aaron Silberstein) is playing FOR THE FIRST TIME OF THE SEMESTER TOMORROW at EARTH HOUSE!

Check out the fb page and their website for more information.

The second annual post-Zonker Harris Day Ishmael feet stomp will be going down this Saturday, April 16 at the Music House.  Bring your prefrosh to be corrupted!  New songs and liver poisoning synthesizers will be debuted.  And it’s free!

RIGHT NOW, Ishmael, will be playing it’s first concert at Wesleyan this semester at the Earth House.  Come on down to hear some brand new songs and old dandies!  Almonds and Elephants will open at 10:30.  Bring your friends!