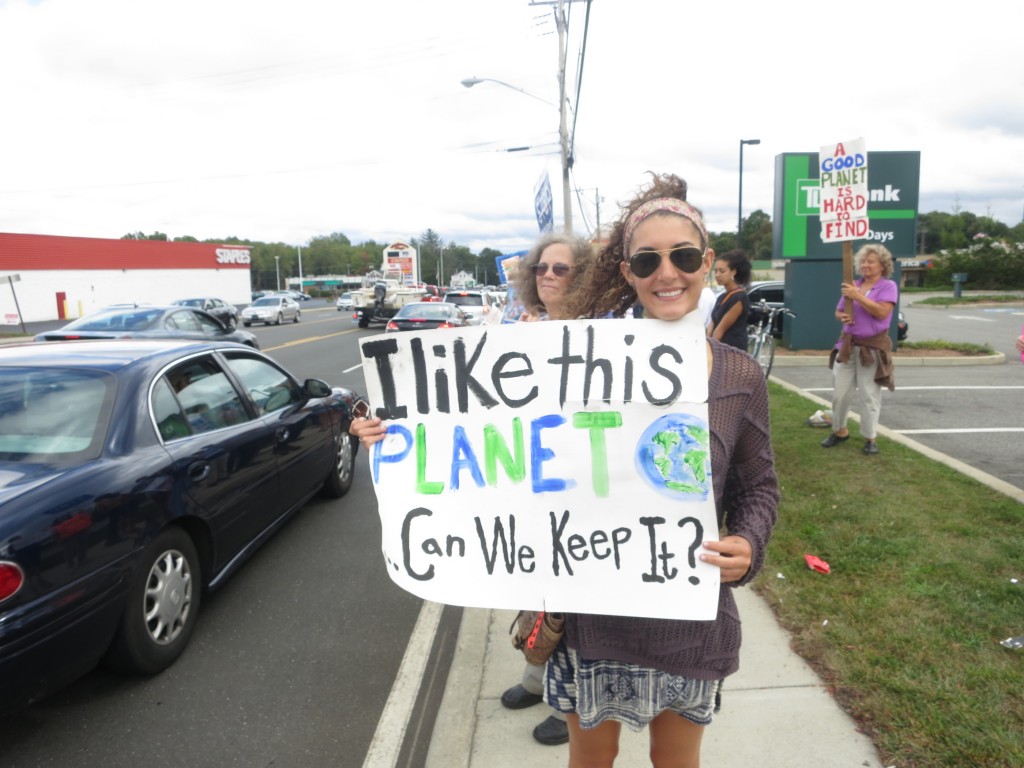 This Saturday, a crowd of over 60 (including roughly 25 Wesleyan students) rallied in Middletown against the Keystone XL Tarsands Pipeline. The pipeline, which would carry an especially nasty and energy intensive type of oil from indigenous lands in Alberta across the American prairie to refineries in the Gulf of Mexico, has been derided by climate scientists as an extraction project that would spell “game over for the planet”.

The energetic march rallied on High Street before marching 1.5 miles up Washington to target TD Bank, one of the primary financiers of the pipeline project. The protesters held signs and banners, formed a picket outside the bank, chanted slogans, and distributed fliers to customers urging them to divest from TD Bank and join local credit unions, which are not-for-profit and member-run. The rally drew participants from all over the state including a number of Middletown locals.

END_OF_DOCUMENT_TOKEN_TO_BE_REPLACED 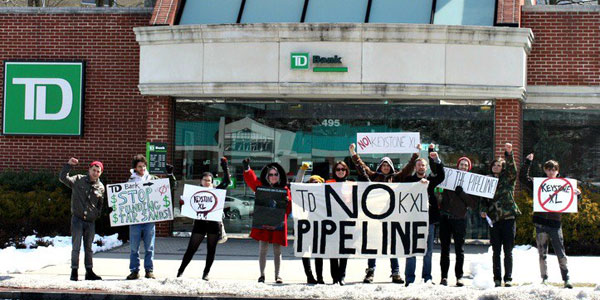 Capitalism vs. the Climate writes in with this call to action:

Rally against TD Bank, one of the primary investors of the Keystone XL Tarsands Pipeline, an extraction project which climate scientists have declared would mean “game over for the climate” if it comes to fruition. The bank is destroying the homes of communities who lie in the path of the pipeline out west, while putting working families out on the street here in CT with evictions and foreclosures. It’s time we fight back and demand justice for our communities. Students in solidarity with the working class.

Meet at the corner of Washington and High at 10:15am and join us as we march to the bank’s location at 911 Washington Street.

This February, Middletown sent more than 50 people to the historic Keystone XL rally in D.C. This is our chance to continue the struggle here on our home turf.

Working people and students need to come together and fight for our common future.

This action is being organized by Capitalism vs. The Climate.

“For almost 40 years I have been so proud of Wesleyan students and alumni. But I am not seeing the level of activism that is necessary for this existential fight.” 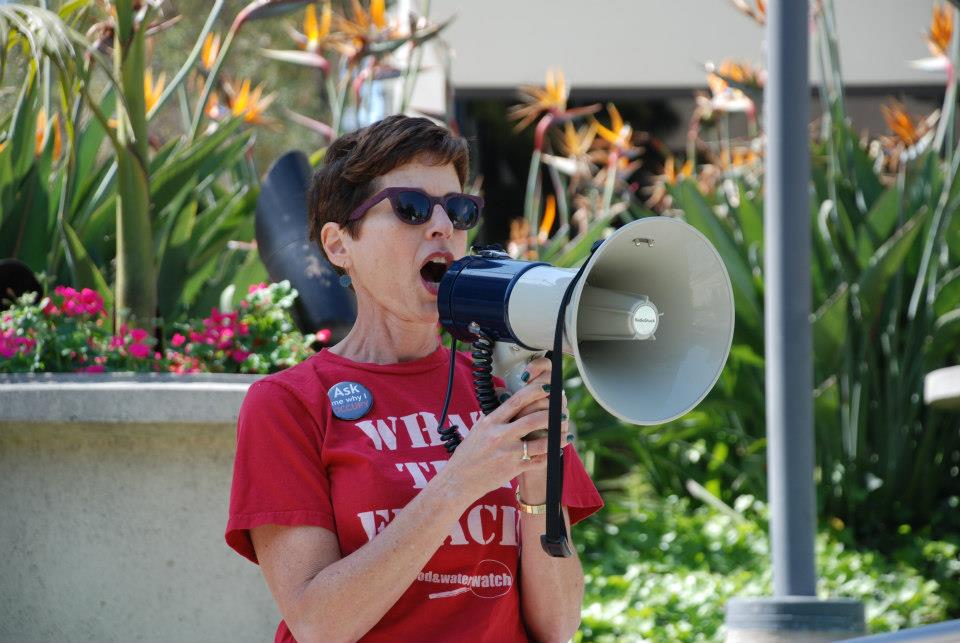 Several weeks ago, members of a student group calling themselves Wes, Divest! put together a petition calling on President Roth and the Board of Trustees to divest from fossil fuels. The petition has since amassed more than 250 signatures, many with accompanying messages of support. President Roth hasn’t yet publicly responded. When asked about the possibility of divestment at a WSA meeting in March, he suggested that it was highly unlikely—and argued that Wesleyan’s endowment shouldn’t be a “vehicle for social change.”

As the push for divestment first starts to heat up at Wesleyan (as it already has at Tufts, Amherst, and much of the ‘Cac), we’re presenting a guest perspective by Lauren Steiner ’79, an environmental activist and Wes alum who urges all Wesleyan students to take up the fight now, before it’s too late:

“Plant trees, create recycled art, tour a chestnut orchard, work on an organic garden and much more during Earth Month at Wesleyan!” So reads the first sentence of an article in the latest edition of The Wesleyan Connection emailed to me in April. As an environmental activist who attended the first Earth Day celebration 33 years ago at age 12 and who planned an LA solidarity rally to the D.C. Forward on Climate Rally this past February, I found this quite dismaying. When I was at Wesleyan between 1975 and 1979, when we hadn’t even heard of climate change, we were actively protesting threats to the environment and human health. In 1976 and 1977, activists from Wesleyan joined the Clamshell Alliance protesting the construction of the Seabrook nuclear power plant in New Hampshire. Where is that activism now when environmental threats are so much worse?

END_OF_DOCUMENT_TOKEN_TO_BE_REPLACED 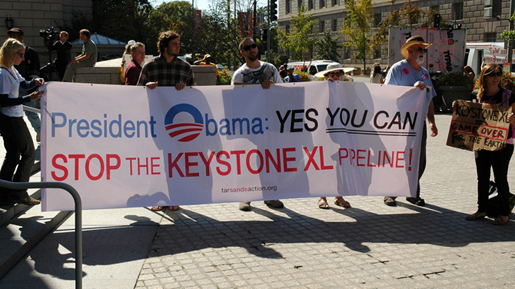 On Sunday, February 17, thousands of Americans will head to Washington, D.C. to make Forward on Climate the largest climate rally in history.

That means a fuckton of Wes-kids need to be there to make our voices heard and help the president start his second term with strong climate action by rejecting the Keystone XL Pipeline.

This is a big deal, and the more people we bring, the bigger it will be and the more fun we will have. Come to the UOC (University Organizing Center, between Beta and Eclectic) at 2pm on Sunday to find out all the deetz and make transportation and other logistical plans.

In 2009, sitting at a table with a bunch of young environmental organizers, President Obama told them: “Your job is to push me.” Unless we show him and the newly appointed Secretary of State John Kerry that lighting off one of the biggest carbon bombs in North America is a really, really, bad idea, he won’t have the political courage to reject this pipeline that climate activists, the media, and Congressional Republicans have turned into a huge political issue. So come to the meeting on Sunday, find out more about the action and the issues, and get pumped to move forward.

5:00 AM Sunday morning, more than 20 Wesleyan students boarded a bus to Washington, D.C. to join 12,000 climate activists in protesting the Keystone XL Pipeline. Obama will soon have to make the decision whether or not to sign off on the pipeline, which will bring crude oil from the tar sands of Alberta across the U.S. to the Gulf Coast where it will be refined and then exported to Europe and Latin America. We went to show him that there is political might against the pipeline and he needs to just say no.

Follow the jump to read a full report of the protest and see pics!!!