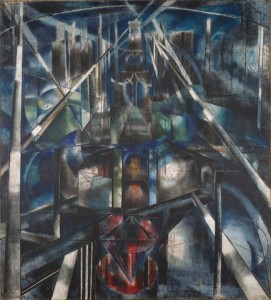 Join us for a special presentation by 2014 MPhil candidate Richard Friswell. Friswell will discuss his thesis, American Futurist Painter, Joseph Stella, and the Decade 1913-1923: “An Artist Interrupted.”

Italian-American Futurist painter, Joseph Stella (1887-1946), gained fame for his abstract depictions of Coney Island, the Brooklyn Bridge and the City of New York, among other early works. In the long trajectory of his career, he interacted with the giants of modern art, participated in the famous Armory Show of 1913, and the avant-garde cultural movement of pre-war New York. He remained torn between his attraction for the symbols of the modern city and a persistent longing for his native Italy. The period, 1913-1923 was the apogee of his career, after which he turned artistically to a profound exploration of his cultural roots and primal mysticism found in nature and faith. A great artist, Stella’s personal vision of the world would sadly and undeservedly marginalize him in the annals of 20th century art history.