UPDATE: Read the email sent to the senior class here.

**Because this post seems to have struck a nerve and is slowly getting buried under event posts, it has been stickied to the top of the page. Please continue the (mostly) civil conversation. I encourage anyone who has something to say to go ahead and comment despite what response they think they’ll receive. Don’t forget to scroll down for new posts!**

As many of you have heard, the senior class presidents recently emailed all members of the senior class with a proposal to cancel the next senior cocks and instead donate the $15,000 allotted to that event for relief efforts in Haiti. That email was sent out on Monday and we have until today (Wednesday) to vote on it.

In the days since, a facebook group has been created and a pretty heated discussion has developed on the ACB. In the midst of Haiti hysteria (fueled partly by compassion and partly by a perverse interest in large scale destruction), the overwhelming majority of discussions have centered on how people can help more than they already have and how what has been done is nowhere near enough. It has become our responsibility and moral duty to get involved and help a people who have already been dealt more misfortune than we can even understand by giving up some of our excess.

Wesleyan students were impressively quick in organizing themselves to come up with strategies for aiding the relief efforts. That is commendable and I really hope that they are successful in their mission. However, this hastily made proposal to cancel senior cocks, has brought out a lot of knee-jerk reactions to vote “Yes” from people who sincerely want to help any way possible and people who were never really behind the idea of senior cocks anyway.

I know I, and many others, don’t appreciate being made to choose essentially between partying and donating to charity. That’s a choice I make every time I party and don’t donate money, but now there is a lot of social pressure to vote a certain way. This post is a chance for me to express what appears to be a very unfavorable opinion that a surprising amount of people share. I also hope this can open up discussion.

END_OF_DOCUMENT_TOKEN_TO_BE_REPLACED

The senior class officers have come up with a potential way of helping Haiti earthquake victims – cancel the Senior Cocktail scheduled for February, and donate the $15,000 that would’ve been used to organize it to relief efforts. From their email to the senior class:

We realize we cannot make a decision of this magnitude without your input, and have therefore created a survey to gauge the class response to this proposal. Although the money was collected for the specific purpose of senior cocktails, we are inspired by the impact that a donation of this size could have.

[…] Our decision will be determined by the majority vote. If we receive a favorable response to the proposal, we will send a follow-up survey to determine which organization we will send the donation to. If the class votes to make the donation, anyone who prefers to be reimbursed for the $20 from the senior pass for this event can anonymously do so.

Feel free to email us at seniorclass@wesleyan.edu with any feedback or suggestions.

Seniors, check your email for a link to the survey, where you can vote by Wednesday night (1/27).

I’m a little torn, myself. Get bused to a one-night boozefest next month, or passively help rebuild Haiti? Dilemma.

END_OF_DOCUMENT_TOKEN_TO_BE_REPLACED

The first Senior Cocks is upon us! Saturday the 31st. Here’s to a good time, and no repeats of previous years’ incidents.

Check out this gallery of  the class of ’09 at Halloween last year – hope there’s a photobooth again this time.

Everyone else, happy Halloween! If Saturday night seems quiet, rest assured that at some point late in the night a cavalcade of  very inebriated seniors will surge back onto campus.

Full Cocktails details after the jump, in case any seniors missed the emails.

END_OF_DOCUMENT_TOKEN_TO_BE_REPLACED 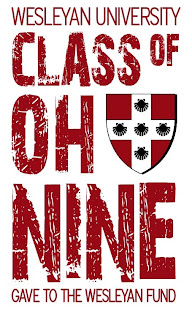 The bad news: Well, okay, they’re not technically free. They’re only free if you’ve donated to the class gift.

The good news: Buying a pass for senior cocks totally counts as donating to the class gift.

If you didn’t manage to pick up your free Senior Class T-Shirt last Friday at Usdan, we will be handing them out again Tuesday-Thursday from 12-1 in Usdan. Seniors who have given to the Senior Gift (i.e. bought a Senior Pass or gave independently) are eligible to get a rockin’ shirt with the above picture as the design. (Courtesy of Chris Choi ’09). Also, you can always give to the gift at any point with your Student Account, Cash, or Check. FFI email eunderwood@wes or jmatthews@wes.

Wale will be at the February 5th Senior Cocktails, along with an eight-piece brass band:

The Senior Class Officers are proud to announce that at the upcoming Senior Cocktails, WALE & an eight piece brass band will be performing. sicknasty.

Check them out here: http://www.myspace.com/wale
TO BUY A GUEST PASS:
Guest Passes will be available for purchase January 26th, 27th and 28th in Pi Cafe for $40. (Monday-Wednesday) 6 pm – 8pm.

Guests must be 21 years of age and must present a Legitimate State ID or Passport to purchase a Guest Pass. Cash only. Guest Passes will be capped at 50 students and will be sold on a first come first serve basis. Guest Passes will not be sold at the venue or the day of.

A Guest Pass grants access to only the February 5th Senior Cocktail event. All Guests will be subject to the University Code of Conduct and must use the university provided transportation to and from the venue. Please email seniorclass@wesleyan.edu with any questions.

Ravid Chowdhury ’09 writes in to remind the seniors that the second Senior Cocktails has been moved from February 12 to February 5. Seniors, check your e-mail accounts for more details about the event.

So, uhh, somehow I missed this Sept. 19 Wespeak at first…

SENIOR COCKTAILS ARE BACK

More info, anyone? Ravid?
And does that mean no drink tickets, or no drinks?