“Pretty much everybody on earth has a threshold for how much to indulge an idiot who doesn’t know how to conduct herself, and I think Ms Palmer has found her audience’s threshold.”

Speaking of familiar face Amanda Palmer ’98, the reviews are in for Theatre Is Evil, the album she funded independently over the summer by taking to Kickstarter and somehow emerging with over a million dollars. Palmer recorded the album with the Grand Theft Orchestra, her latest backing band ensemble. If The Guardian is to be believed, the album “feels like sitting on the bed of your tattooed, far cooler cousin 30 years ago, while she tells you ‘all you need to know’ about music.” Sounds about right. Ben Folds, meanwhile, had this confounding opinion to report: “This record is as good as it gets. You’re going to shit when you hear it. It’s going to be around for ages. Otherwise, it’s total crap.” You can hear the album for yourself on Neil Gaiman’s site, or pay what you want here.

If you’re the visual type, observe Palmer’s gruesome new video for “The Killing Type,” in which her band performs in white in a bright white room before Palmer murders her lover and splashes it all red. (“I’m not the killing type, I’m not the killing type,” she pleads in the track’s lyrics.) If you’re squeamish at all, consider skipping it entirely.
[soundcloud url=”http://api.soundcloud.com/tracks/58042366″ iframe=”true” /]

But funding the album isn’t the only task Palmer bestowed on her fans.

END_OF_DOCUMENT_TOKEN_TO_BE_REPLACED 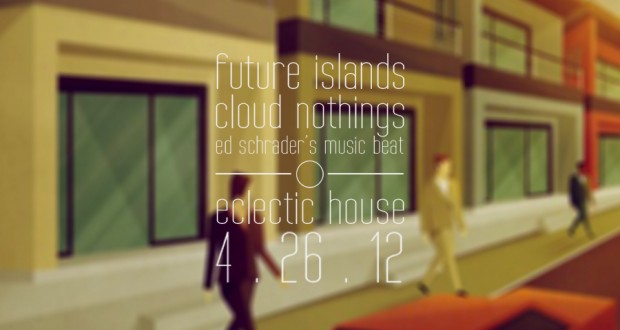 Hot diggity damn: Baltimore-based synthpop trio Future Islands, Steve Albini-approved indie-turned-noise rock project Cloud Nothings (whose Attack on Memory is seriously an attack on every other album I’ve heard this year), and total-mystery-to-me openers Ed Schrader’s Music Beat are coming to Eclectic next Thursday night for what is being billed as “the last big-ass concert at Eclectic.” I believe it. Tickets are available for $5 and, as usual this concert season, reservable via Aural Wes’ Ticketleap site. (That’s not the whole purchase. You have to pick them up in Usdan, which requires $5 cash.)

For more information on the acts themselves, you can hustle on over to Aural Wes, which succinctly states that “if you’re trying your best to get sweaty before finals, this is definitely the show to do it at.” Meanwhile, Sky Stallbaumer ’12 writes in about ticket pickup details. HE EXPLAINS THINGS IN ALL CAPS TO DENOTE THAT HE IS NOT FOOLING AROUND:

Future Islands and Cloud Nothings tickets that were already reserved online can be picked up THIS WEDNESDAY starting at noon in Usdan. From here on out, all the important stuff is in caps.

YOU NEED A PHYSICAL TICKET FOR ENTRY INTO THIS CONCERT. YOUR TICKETLEAP CONFIRMATION IS INSUFFICIENT. THESE TICKETS COST $5, CASH ONLY. YOU CAN PICK UP RESERVED TICKETS IN USDAN starting this Wednesday. Did everyone catch that? PHYSICAL TICKETS ARE NECESSARY FOR THIS CONCERT. AS THEY ALMOST ALWAYS ARE.