The Students for Consent and Communication are looking for performers and stories for this year’s Take Back the Night. TBTN is an international movement to end sexual violence and bring the community together to support survivors. At the annual event we have two speak out circles for survivors to share their stories but if you are interested in sharing your experience in a different way we have two alternatives.

If you would rather not share your story in person, you can submit an anonymous story online to be read for you at the event. Submissions can be made here. We will be collecting these stories until 12:00 pm the day of the event.

You may also share your experience at the beginning of the event through the performance of a song, poem, rap or dance. If you are interested in performing, please email wdonnelly[at]wesleyan[dot]edu.

Take Back the Night will take place Thursday April 23th at 7pm- look out for the Facebook and Wesleying event soon for more details!

Pictured: Nina Gurak ’16, co-president of Students for Consent and Communication.

TRIGGER WARNING: The following discusses emotional and psychological abuse, and the issue of sexual assault at Wesleyan, and may be triggering for some readers. Community and official support resources can be accessed here, here, and here.

Students for Consent and Communication have had a busy semester so far. After staging a “How Much Longer Will We Carry That Weight?” demonstration, confronting the Board of Trustees about the alarming frequency of sexual assault on campus, SFCC brought their latest campaign online. With an “Abuse Is Abuse” photo campaign, showing students holding up signs describing forms of psychological and emotional abuse, the group looks to push the administration into action about creating a definition and policy about that abuse. (Photo campaigns in general are having quite the week, and for good reason.) Their petition, which you can read and sign online, has over 90 signatures at the time of publishing:

We, the community of Wesleyan University, believe that emotional and psychological abuse poses a direct threat to the health and safety of our students and community.

We as a school stand in solidarity with survivors of emotional and psychological abuse.

We strongly believe that the Department of Education got it wrong and that we can do better.

We demand a strong and clear policy that defines emotional and psychological abuse and advocate for its inclusion in Wesleyan’s existing Sexual Misconduct Policy.

I reached out to Nina Gurak ’16, one of the co-presidents of SFCC, about the campaign. Below, you can see a few of the photographs from the campaign, which are also on Facebook and Twitter. On a related note, there is a forum to discuss Title IX policy and procedure tonight at 7PM in the Daniel Family Commons, which will inform policy changes for next semester.

END_OF_DOCUMENT_TOKEN_TO_BE_REPLACED 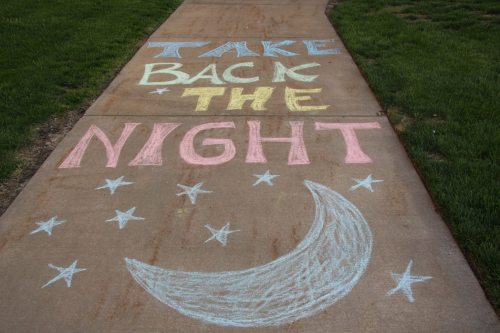 In preparation for this year’s Take Back the Night, the Students for Consent and Communication (SFCC) are collecting anonymous stories for the event.

Take Back the Night is the global movement to end sexual violence and allow survivors a safe space to share their stories. In addition to our two speak out circles where every member of the community is able to share their experiences, we are adding these anonymous submissions so anyone who is uncomfortable sharing their stories in person can have them read by an SFCC member during the event.

If you are interested in sharing in this way you can submit stories here, or drop a story off during lunch and dinner in Usdan where we will be tabling for the next week. Again, all submissions are anonymous and we will accept them up until the day of the event next week!

Lastly, this year’s event will also have a new showcase of performances including songs, poems, raps and displays of visual art. If you are interested in performing please contact Caillin Puente (cpuente[at]wesleyan[dot]edu) or Nina Gurak ’16 (ngurak[at]wesleyan[dot]edu). If you have any comments, concerns or questions about the event please feel free to contact us as well.

Take Back the Night will take place Thursday April 24th at 7pm- look out for the Facebook and Wesleying event soon for more details!

Students for Consent and Communication will be having our first meeting of the year this Thursday at 4:15 PM in Room 113 of 41 Wyllys!

This will be an informational meeting where we’ll briefly explain the club and our goals and discuss our plans for the upcoming semester.