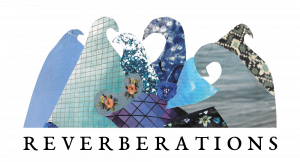 Reverberations Mag is a two-year-old online publication for young people to respond to art in a personal manner. We’re based out of Wes and publish students/young writers from all of the country. We especially encourage members of the greater Middletown community to submit their work.

We publish 3 types of pieces, which you can learn more about in our submission guidelines: Reverberationsmag.com/submit. If you’d like to write for us, we are looking for staff writers. This entails writing for us once per month—which is really quite manageable as our “Fresh Thoughts” are only 200-500 words in length. If you are interested in this position, simply submit one piece in the next 2 weeks and let us know you’d like to be a staff writer. If you don’t have the time to become one of our staff writers, we welcome irregular submissions as well. Respond to the art in your life!

For five days we fought.  For five days we did not let go. To that logo we threw every meme they had.  With every drop of spit in their bodies we shouted at the top of their lungs, not for a second pulling away from the mission at hand.  And on the sixth day Roth declared it no more.  No more would the logo loom strange over us.  Our old friend the “W” reinstated once again.

SO LET THE FESTIVITIES BEGIN! Let the second wave of memes spread across the land.  The message has indeed been received, and with it we remember the power of our voices.  We mustn’t stop now though.

Please remember that $1 million was still spent on this redesign.  Even though the logo is being reverted back it doesn’t mean there are issues still on this campus that the $1M would have much better served. Don’t let this little victory distract from the greater issues that loom large over our experience here both as current students and soon to be alums.

In exciting news, however, Roth, in his all school email announcing the retirement of the “new” logo, stated the administration anticipates opening up the process to accept student designs.  This is incredibly exciting news, and as stated in our article that came out yesterday, may actually cause the new design to be an accurate representation of the way we as students feel about our school.

Find out more about the ongoing progress here.

END_OF_DOCUMENT_TOKEN_TO_BE_REPLACED

There’s a new campus art/lit mag and they want you to submit your work:

Submit to our new publication: Reverberationsmag.com!

Art isn’t just good or bad; it connects with us. We created Reverberations for young people to respond to art (in the most inclusive sense of the word). In this way, we begin to form our own identities and ideas. We hope to share work that engages with the big questions, that relates to the global and/or the individual, and, most of all, makes us feel deeply. There is nothing more exciting than the meaningful interaction between art and ourselves. –Linne and Sage

When to Submit: “Now and Forever” 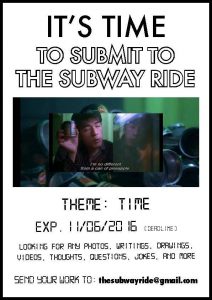 IT’S ABOUT TIME. The Subway Ride, the all-inclusive human expression magazine, is accepting submissions for our Fall’16 magazine and blog, and it is, indeed, about TIME. You know the rules, submit any work (anonymously or not) you have as long as you think it is respectful to others and is vaguely- or closely- related to our theme. Be creative!

We accept videos and sounds/music in addition to printable works.
We will also have boxes traveling around campus (related to ‘REGRETS’ and ‘TIME TRAVEL) (especially near bathrooms and cafes) where you can submit anonymous short pieces, so watch out for those.

We are, after all, cans of pine-apples (points for you if you get the reference).

LOAM magazine, an environmental arts magazine started by Kate Weiner ’15 and Nicole Stanton ’15, is back! We are looking for photographs, artwork, essays, poems, and thoughts that in some way explore our relationship with the earth. We’re hoping to get a jump on submissions for Fall 2016, so email your work to loam(at)wesleyan(dot)edu. We can’t wait to see what you send us!

Also, check out Kate and Nicole’s website to see all the beautiful work they’re doing as they expand LOAM to the wider world. We are so excited to collaborate and take their project forward at Wesleyan. 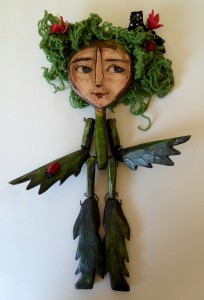 Hi! We are currently working on a project about the intersections of environmentalism and social justice. We want to look at how art can materialize the entanglement of humans and nature and the implications of that relationship as it is lived in our world.

Our goal is to create a collective art installation and gallery show to bring the Wesleyan community together. We are interested in how art can be used as a unifying force and to facilitate interactions between social justice/environmental activism, art focused on bridging gaps.

Art submissions should address the relationship between Environmental Issues and Social Justice; they can be in the form of drawings, paintings, music, spoken word, written pieces, expressive movement, anything that you feel expresses your ideas! For performance pieces or other types of artistic expression that cannot be sent through email, please submit a proposal. We hope that we can create a space for collaboration and coalition-building with different groups across campus as we build this collection together. 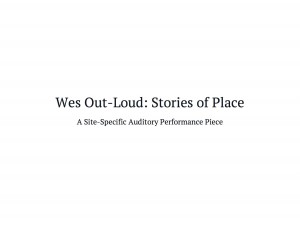 Your gently used T-shirts could be in a devised theater piece from the Theater Department!

Wes Out Loud, the Theater Department’s Spring 2016 production, is collecting knitted T-shirts made from natural materials (cotton, poly cotton, rayon, etc.) to be used for a set installation. Email rdobrin[at]wesleyan[dot]edu for donation pick-ups, or drop off any donations in the Theater Department lobby by April 8th. Thank you in advance for your help!

For all you creatives interested in the terror that is the human brain:

Submit your work to Headspace, a student run publication! Headspace examines all topics related to the mind, the brain, and behavior. This year we are looking for submissions related to the topic, “What is Consciousness?” We seek submissions of a variety of formats including prose, poetry, science writing, visual art, or anything in two dimensions.

Email your submissions with your name and class year (if applicable) to wes.headspace[at]gmail[dot]com by Friday, February 26th. Anonymous submissions are welcome. Our only guideline for submission is that it be under 1200 words.

Thanks very much for your consideration and, of course, do not hesitate to contact us for questions or comments. 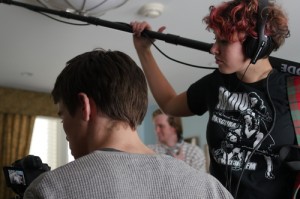 Jose Luis Sanchez ’18 writes in with a message from Cardinal Pictures (formerly known as the Wesleyan Film Project):

Want to see your film come to life? Cardinal Pictures is looking for new screenplay submissions for the spring semester! If you want to submit an idea or screenplay, please check out our submission page HERE.

If you have any questions, feel free to email cardinalpictureswes[at]gmail[dot]com.

There’s no deadline for this one, but use the rest of your winter break time wisely!

The deadline for submissions to Considering the Universe has been extended to Monday, December 14 at 11:59pm.