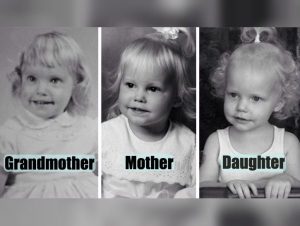 It’s Family Weekend, and there are a ton of parents on campus. Have people mistaken you and your parent for siblings? Have you spotted a parent and child that look identical?

We want pictures! Email us  (staff[at]wesleying[dot]org) your Family Weekend pictures of identical parent/child pairs with the subject “Parent Write In” and your name and class year in the body (as well as the name and class year of the people in the picture), and we’ll feature you guys on Wesleying! 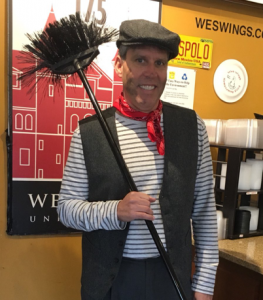 “For your viewing pleasure”
–Ed Thorndike ’89 of WesWings

Alright, ya’ll. It’s the day that we all look forward to. It’s the end of Spooptober, the start of Christmas, because we can’t capitalize off of Thanksgiving, unless it’s Black Friday.

It’s Halloween. And did ya’ll impress. We asked (yesterday) for your costumes, and  I’m very impressed by the creativity of the student body.

Check out the costumes after the jump!

END_OF_DOCUMENT_TOKEN_TO_BE_REPLACED 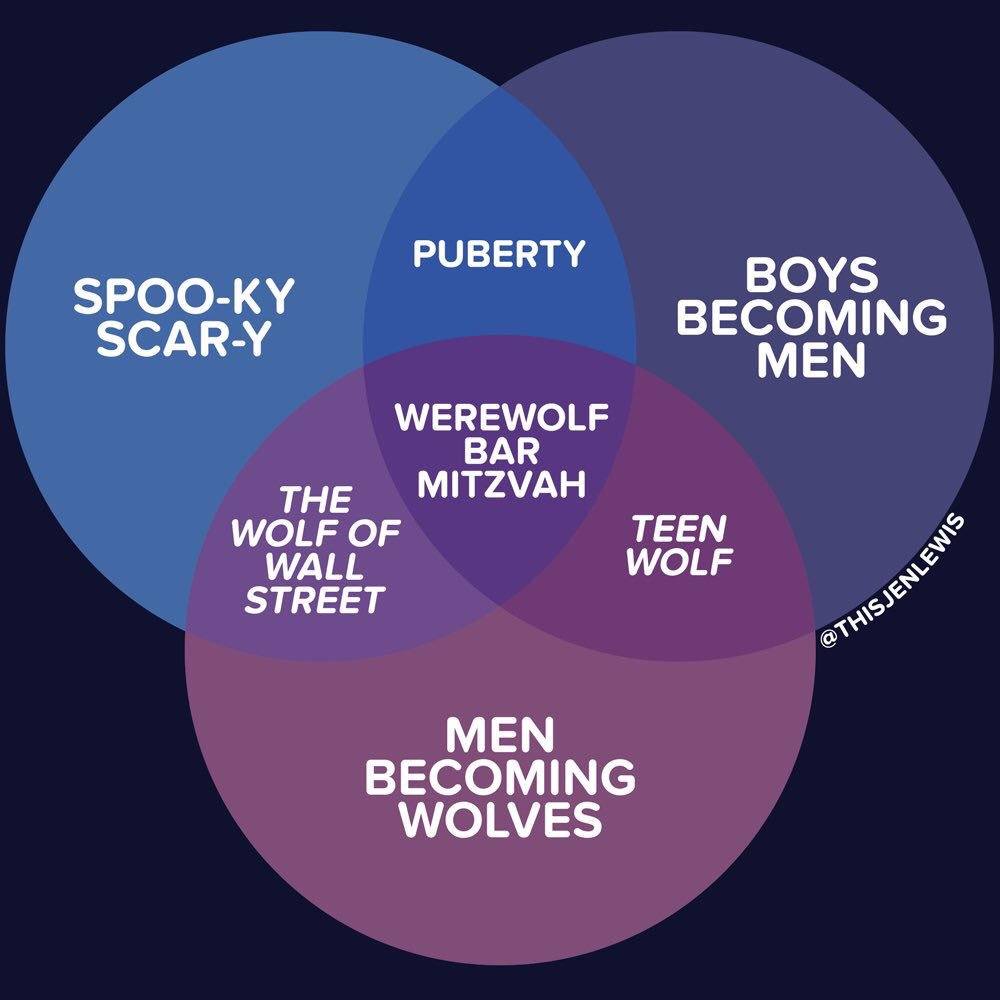 We want your spoo-ky/scar-y/sexy/stylish costumes!

Email us (staff[at]wesleying[dot]org) your pictures from Halloweekend/Halloween with the subject “Costume Write In” and your name and class year in the body (also any fun info/captions for your picture), and we’ll feature you on the blog! Group costumes and bad puns encouraged! 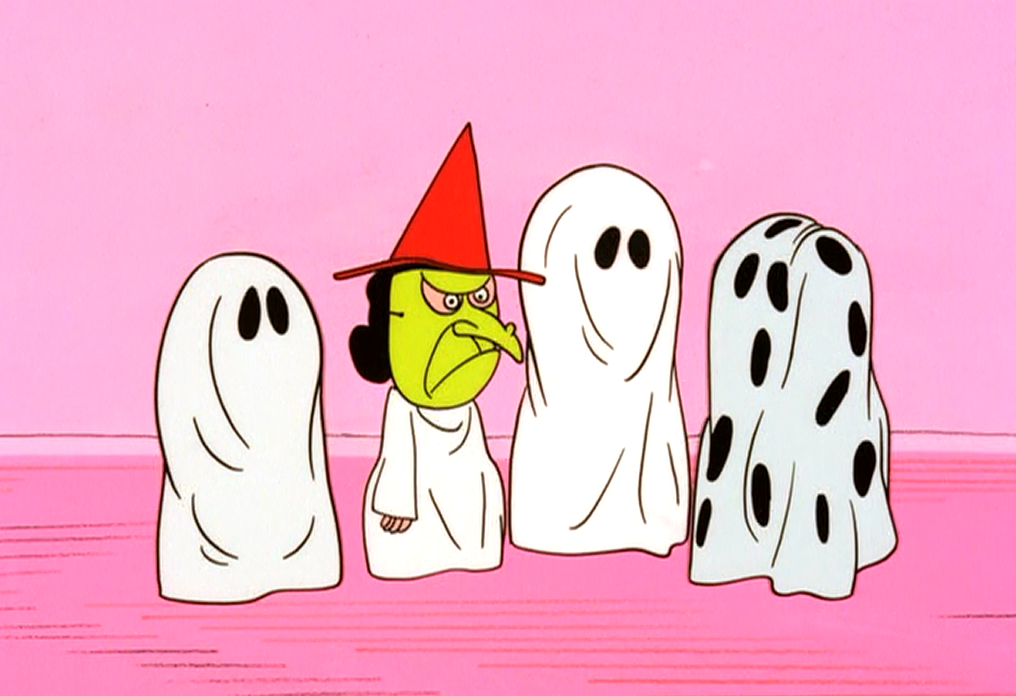 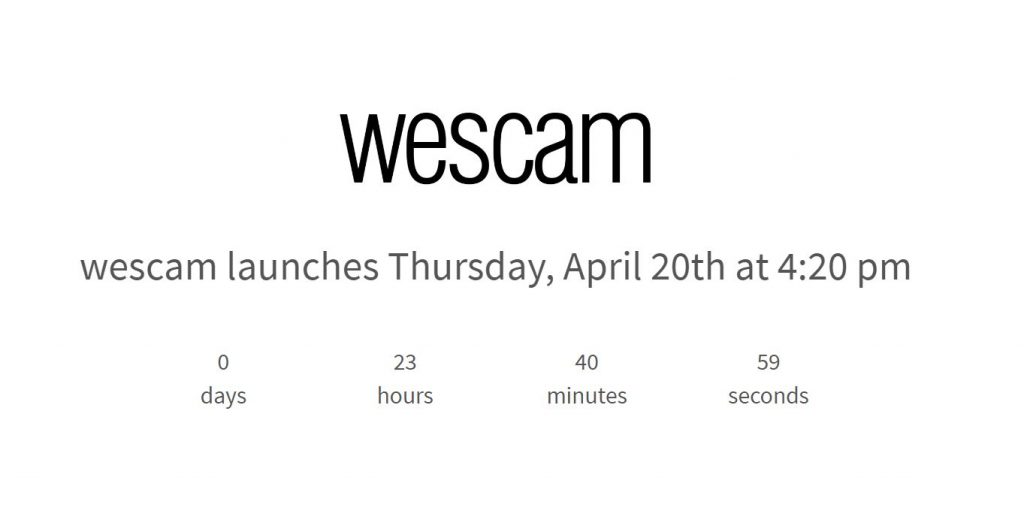 Wescam launched last Thursday and although it’s only been 6 days since then, I haven’t entered a single public space on campus without overhearing the noun (Wescam), the verb (wescam), the preterite form of the verb (wescammed), the gerund (wescamming), the adjective (wescammy), and/or occasionally the adverb (wescamly). And, as I mentioned in my previous announcement post, we are doing a write in!

Our past write-ins have been some of our most viewed articles ever. The Orgasm Chronicles now has 41,890 views. WOW.

How this works: (1) Submit an anonymous entry to the Google form after the jump, (2) Make sure you tell us a Wescam story; you won’t be posted if this isn’t tangentially or totally Wescam related, (3) Tell your friends and wescams to write in! We don’t always get a high enough volume of quality entries to warrant a post, and that should not happen. So tell people to submit!

END_OF_DOCUMENT_TOKEN_TO_BE_REPLACED 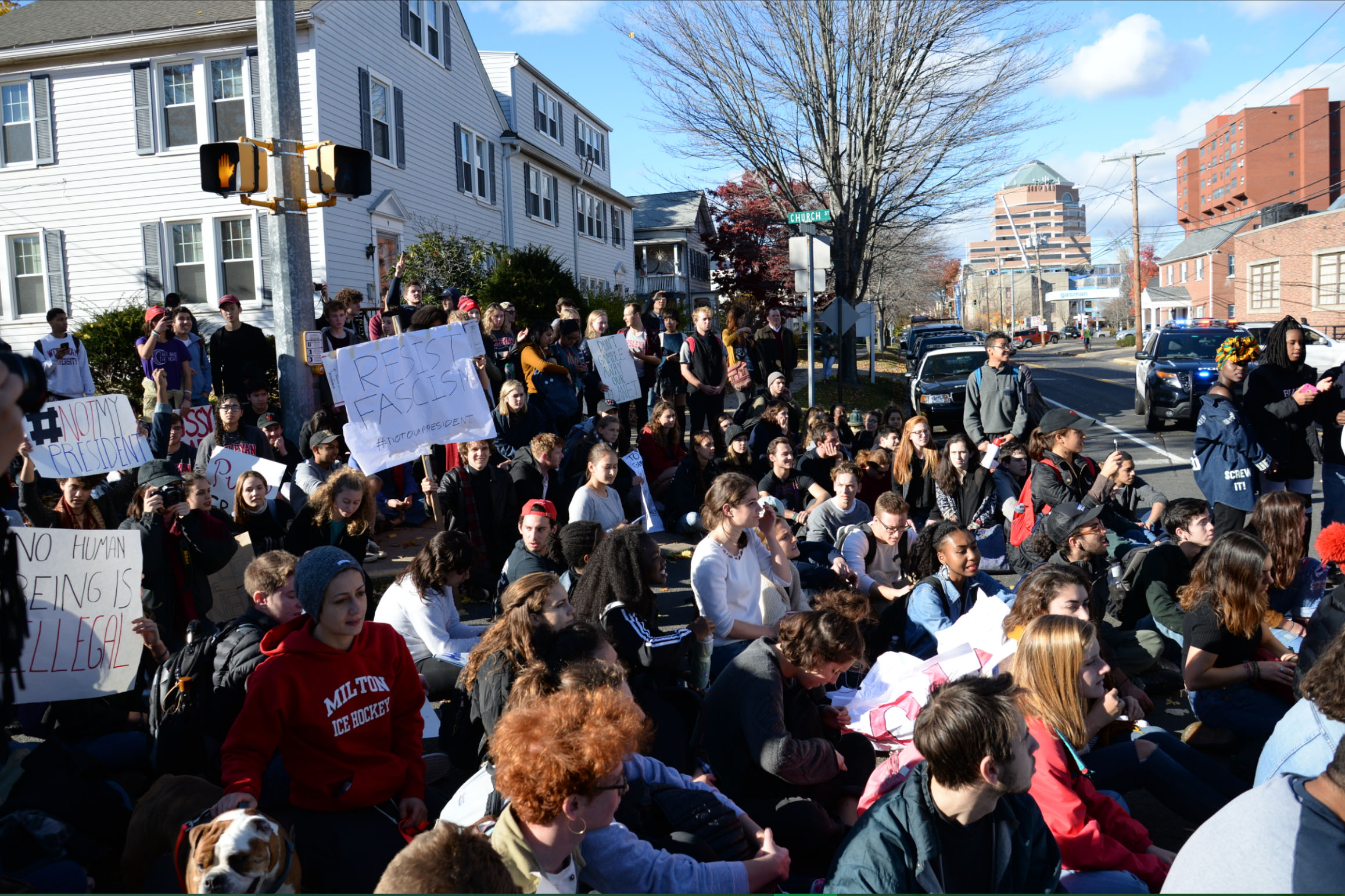 The world is a scary place right now, but one thing is for certain: we’re going to need a lot of organizing these next four years, and especially these next few months, while there’s still so much momentum for grassroots movements. National groups such as Planned Parenthood and Democratic Socialists of America have already made their intentions to resist against Trump’s proposed policies clear. And however you may feel towards the Women’s March on Washington and its sister marches, they did encourage millions to take the first step in any sort of activism: showing up.

Here at Wesleying, we’d like to ask: how do you plan to resist, get involved, protest, sit-in, or show up this semester? Your plans can be as menial as making a few calls to representatives, or as grandiose as organizing a large-scale rally. They can be a cohesive schedule or just a rambling brainstorm of causes you’d like to get involved with. We’re especially looking for ways to help right here in Middletown with local groups, but whatever your cause may be, we want to hear from you!

Share your ideas here, or below. Responses may be recorded anonymously, if you so choose, and there’s also a box to check if you’re okay with your responses being published on Wesleying. Depending on how many responses we get, we’re hoping to post a bunch of them throughout the semester, in the hopes of generating discussion of how others can get involved.

END_OF_DOCUMENT_TOKEN_TO_BE_REPLACED 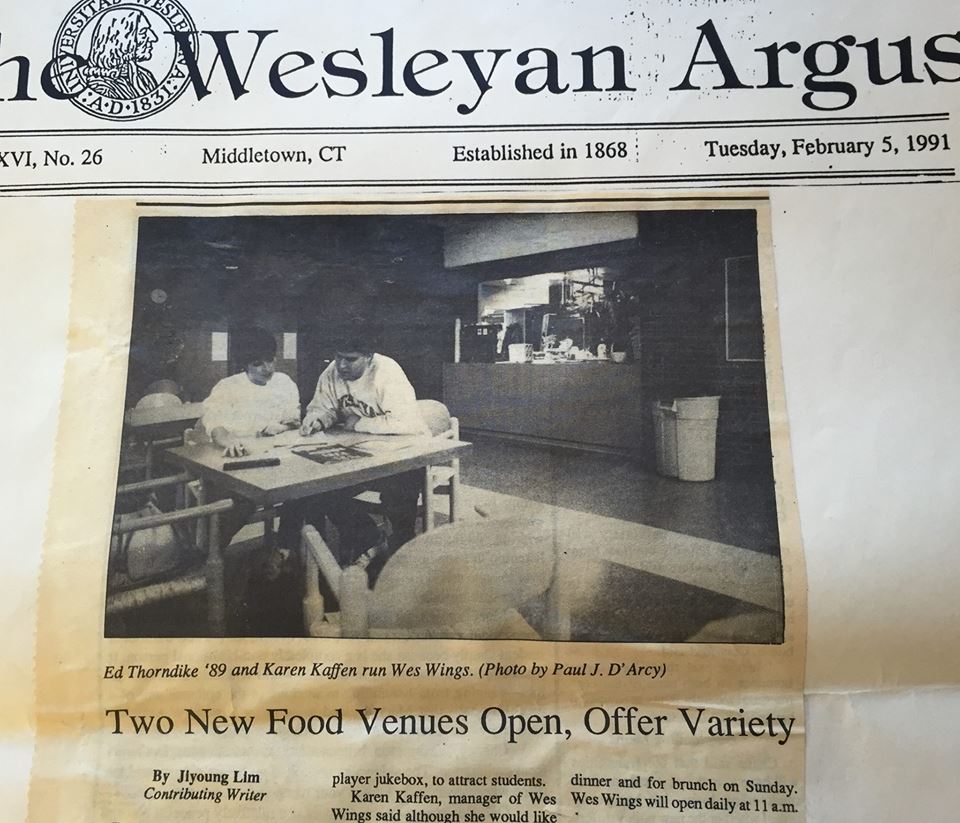 We’re stoked: This Saturday, February 6, 2016, beloved campus eatery WesWings turns 25 (FB event here). Students, alumni, and starving Wesleying bloggers around the globe are huge fans of all that Ed, Karen, and the Swings team have done for the Wesleyan community, so here’s a small way to say thanks.

For this week’s write-in, we want you to tell us why you love WesWings. This can be in the form of a favorite memory, a haiku professing your love for breakfast pails, a love note to Ed and Karen, or an explanation of your favorite special. Posts can be from anyone (alumni are welcome!) and can be as long or as short as you want, so starting writing. We’ll post the submissions we receive on Friday or Saturday.

If you’ve been involved with Wesleyan any time after 1991 and still somehow don’t know what WesWings is, check out astag_rocky’s interview with the breakfast pail master himself (and Swings founder) Ed Thorndike ’89.

You can submit your WesWings love HERE HERE HERE.

And if you have any questions or are oddly suspicious of Google Forms, feel free to email us at staff(at)wesleying(dot)org. 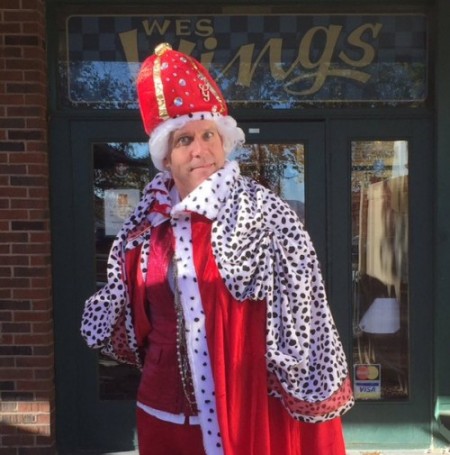 Last week, we made a write-in for Halloween costumes. We received 23 costumes—up from last year’s turnout of only 7! Here’s a (moderately-sized) handful of costumes that people sent in to Wesleying that show off the spooky, creative, and downright weird Wesleyan spirit:

END_OF_DOCUMENT_TOKEN_TO_BE_REPLACED

It’s the most wonderful time of the year! No, not Christmas… this is Halloween!

While we all know that Halloween is actually just an excuse to buy a shit ton of candy to eat alone in your room and not be judged by the clerk at Wesshop/Rite Aid, some people really get into the holiday spirit with costumes!

Are you preparing for election season by mimicking your favorite (or least favorite) candidate? Channeling your inner Mean Girl with a sexy animal costume? Playing it old-school and going as a bed sheet ghost? Any Michael Roth impersonators?

Whatever you’re planning (or if you haven’t planned at all and are currently scrounging through your closet trying to find something remotely festive), we want to hear from you! Show off your creative, spooky, or just plain weird side—we want to see it all!**

So last week, we made a call for student Halloween costumes. There are roughly 2,900 students attending Wes, and we received a total of SEVEN costume submissions—that’s 0.2% of the student body. That kind of turnout is only comparable to that of our athletic events (except for baseball–we have the highest attendance in all of D3!).

Without further ado, a non-representative sample of people who are clearly more enthusiastic about their costumes than you were about yours: 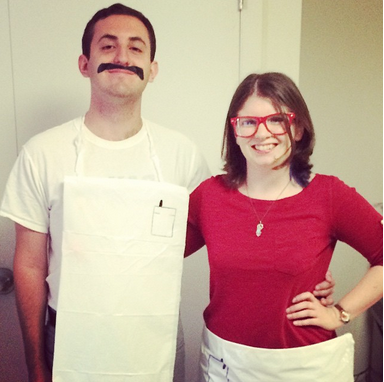 END_OF_DOCUMENT_TOKEN_TO_BE_REPLACED

Halloween’s coming around this weekend (in like, three days) and everyone’s gearing up for a good time.

Whether you’ve got your superhero costume all set, or you’re just going as a disgruntled/reclusive college student, we want to hear from you.

Have you been piecing together your costume for the past couple weeks? Did you just order it on Amazon Prime yesterday? Are you going as sexy ebola this year? Let us know. Show off your spooky style! your eerie ensemble! your ghostly garb! It’s your time to shine.

C’mon, where my witches at?