Maybe you thought local funnyman and “College of Moving Image” expert Will Feinstein ’13 would finally give up on combining aural and visual stimuli to generate “lighthearted,” “viral” “content” after achieving his lifelong goal of becoming a WesCeleb. You thought wrong.

Nearly a year to the date after debuting viral sensation “Ain’t Tryna Say Goodnight,” Feinstein has directed the music video debut for Tonsil Hockey, a pop-punk band Jason Katzenstein ’13, Adrien DeFontaine ’13, and Zak Malik ’14 formed presumably after they got tired of playing Blink-182 songs to bleeding naked men. Please note that none of the aforementioned characters have had their “viral” “content” promoted on this blog in any form previously.

END_OF_DOCUMENT_TOKEN_TO_BE_REPLACED 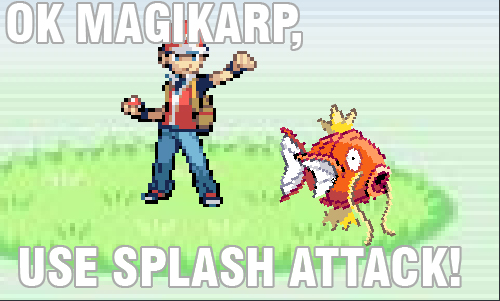 Alienor Leon ’14 wants you to be the very best that no-one ever was. To catch them is your real test, and to train them is your cause:

This year we will be battling on Nintendo DSs using Pokémon Black and Pokémon White 2. While the mechanics and graphics will be from the latest generation, the rental Pokémon available to you will all be from 1st gen—in short, you’ll be using all your Kanto favorites! Battles will be displayed on a projector screen for everyone to watch, and between battles, just like last year, we will play funny/weird Pokémon youtube videos. We also encourage you to bring your own Pokémon games so you can battle your own Pokémon and trade.

This is a casual event, so feel free to stop by at any time this Friday! Refreshments will be served.

If you want to be inspired for your upcoming matches, watch this epic video for some battle tips.

Back in February, just before winter storm Nemo crippled most of campus, the CFA Hall hosted “Guns and Gun Violence: Crisis, Policy and Politics,” a panel discussion featuring various visiting scholars. Chaired by Wesleyan’s own Professor of History and African-American Studies Leah Wright, the discussion involved professors Saul Cornell, Kristin A. Goss, and Matthew Miller from Fordham, Duke, and Harvard, respectively—a rather stacked lineup of experts. The room was packed, but in his reflection on the discussion that ensued, Wesleying’s justice described it as an echo chamber of predominantly left-leaning views:

While I will happily advocate for the liberal solution for many issues (with appropriate data as backup), I would also like to hear what people with “non-traditionally-Wesleyan” opinions have to say, especially with an issue as explosive as gun control. And this event would have been a perfect opportunity to bring in a panelist with a non-liberal perspective. But we didn’t. And we can tell ourselves all we want that this was because the “other side” simply isn’t correct, but in the end, that’s the real problem—we’re just talking to ourselves.

If you missed the event but remain interested, the Allbritton Center for Building Names That Sound Like Robots has only recently managed to post the entire thing on YouTube. Judge for yourself—watch it below, or at this link.

END_OF_DOCUMENT_TOKEN_TO_BE_REPLACED

Here’s what happens when dumpster-diving and physics club combine.

Here at Wesleying, we’ve got “Wesleyan University” on Google Alert, and every once in a while something magical and unexpected pops into our inbox. Like this video of a Society of Physics Students meeting in 2001 or 2002, when your friendly neighborhood physics nuts used liquid nitrogen to blow a Macintosh Classic into smithereens on the second floor of the Science Tower.

The video appears courtesy of a rather prolific YouTuber by the username of “sturmovikdragon,” whose credits include a handful of other “zany stunts” by the Wesleyan-based physics club. “sturmovikdragon” (possibly not hir real name) gleefully identifies this event as “perhaps the greatest achievement of the Wesleyan University Chapters of the Society of Physics Students,” noting that the group went so far as to use extension cords and work lights to illuminate the scene and that “SPS President Adam took the valiant role of arming the bomb and properly orienting the Mac Classic for the experiment.” Damn, that’s commitment.

According to the YouTube blurb, the videographer obtained this and various other Mac Classics by dumper-diving.

All right, Admissions Office, you can stop trying to recruit people.  Your job is done.  Christopher Owens has us covered.

As you well remember, former-member-of-the-band-Girls-and-current-solo-artist Christopher Owens romanced a full-capacity audience at Memorial Chapel last Thursday, playing the entirety of his solo debut/mini-rock opera Lysandre as well as a handful of cover songs.  The concert itself was extremely enjoyable, including the opening set by Mara Connor (Wes/Vassar ’13), though nobody could be quite certain what Owens himself thought about the concert, or the audience or atmosphere or mood or time of day— his sub-hour-long performance was incredibly short on stage banter, by which I mean he said “thank you” and nothing else.

Which was fine.  His Cali-beach-rock sound and golden-haired-god image work well with a strong-but-silent attitude.  The music spoke enough for the both of them.

END_OF_DOCUMENT_TOKEN_TO_BE_REPLACED

Are you out of points? Are you sick of cooking for yourself? Do you just hate food right now? Well, then you should visit HowToBasic, a gritty document of one (apparently Australian?) man’s struggle to learn how to cook with his left hand while holding a camera with his right. At some point, however, this struggle to cook as “properly,” “correctly” and “quickly” as many of his titles suggest went horribly awry, and he decided it was easier to embrace a Jackson Pollock-like aesthetic, if Jackson Pollock had used eggs and dairy products as his main medium. It’s like Pronunciation Manual, but for food.

END_OF_DOCUMENT_TOKEN_TO_BE_REPLACED

How much work can you get done in a week? You’re finding that out as we speak, I imagine. How much working out can you watch in six minutes? You’re about to find out:

Check out Workout Buddies: A Bro Love Story, a short film directed by Bubba Fish (USC ’13) and co-written, produced by and co-starring Michael Steves ’13. The short was recently featured on Total Frat Move.com, a website that represents the pinnacle of journalistic and artistic integrity! Every heart breaks… bro.

Alright, back to more innocuous means of procrastination…bro.

Middletown to CenterPlan: “I think this is just La La Land!”

Speaking of Tuesday’s open forum regarding the proposed Wesleyan bookstore relocation (liveblog here, additional coverage here), turns out our comrades over at the Middletown Eye managed to film the entire discussion, beginning with a presentation from developers CenterPlan and continuing with a whole barrage of comments from pissed off community members. Thanks, Middletown Eye!

You can check out a “highlight reel” courtesy of the Eye here. My personal favorite clip, in which a bearded community member begins laughing and then stands up and volunteers to run for office to oppose the development, appears above. “I’ll do that!” he warns. “You watch.” A close second is this one, in which a rather disgruntled Professor of Music Neely Bruce tells the CEO of CenterPlan that he’s living “in La La Land.”

Watch footage of the entire proceedings (it’s about 90 minutes total) below and past the jump. More on the discussion here.

END_OF_DOCUMENT_TOKEN_TO_BE_REPLACED

Hunkering down on campus? Read this. Don’t read this.

Happy Thanksgiving, Weszzleyan. We encourage you to celebrate the day with an old classic, “Tryptophantasm.” Starring Sam Korda ’13, Solomon Billinkoff ’14, Eliza Forman ’13, and Stephan Stansfield ’13, it’ll have you feeling like you’re suspended in a sea of cranberry sauce for eternity in no time. Though you may feel that way anyway by the time you read this…

Have a fantastic Thanksgiving break Wes! TREAT YO’ SELF whether you’re on or off campus!

Staying on campus over break? Good for you, you studious studier. The Thanksgiving Break dining schedule is your friend. Consult it wisely. There isn’t much food to be had between now and Saturday (both WesWings and Red & Black are also closed until then), but Main Street is only a scant few blocks from your dorm. So is Marco’s Deli. Choose wisely.

END_OF_DOCUMENT_TOKEN_TO_BE_REPLACED

It’s long. You should watch it anyway.

Following public comments by President Roth and the WSA, the discussion surrounding Monday night’s forum on race and diversity continues around campus—in online comments, in blog posts, but most of all in personal conversations I’ve overheard (or took part in) over the past few days.

If you missed the forum and still aren’t sure what all of the talk is about, Ben Doernberg ’13 (who livestreamed the event on Monday) has taken the liberty of consolidating his footage into one master YouTube video. It’s long (the forum began at 7:30 and continued well past 10 pm), and the video quality isn’t ideal, but you should easily be able to make out what’s being said. And you should watch it, too. Three hours is daunting, so split it into segments. Let the audio play while you’re doing work. Listen to it on your iPhone while running. But listen.